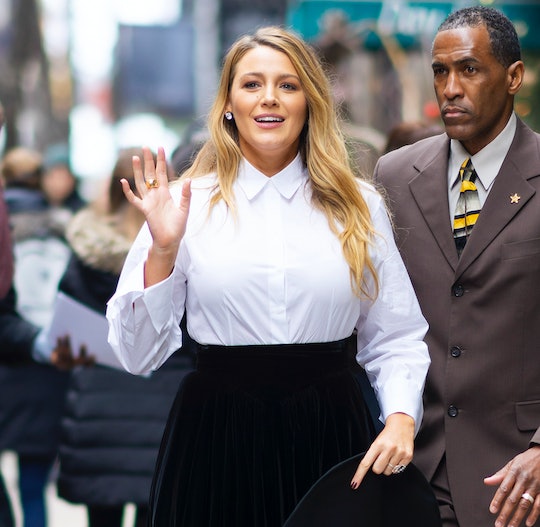 As a mom of a new baby girl who's also promoting a new movie, Blake Lively is out there pumping breast milk on the road like a total boss. The Gossip Girl actress has been out and about promoting The Rhythm Section, marking the first time she has been seen on a press tour since welcoming her third daughter with husband, Ryan Reynolds last October. And on Wednesday, she shared a post on her Instagram Story giving fans a behind-the-scenes look at the oh-so-glamorous life of a new mom who also happens to be an incredibly famous actress.

Last night, Lively — who shares 5-year-old daughter James, 3-year-old daughter Inez, as well as their newborn daughter with Reynolds — shared a photo of her new best friend, her Medela USA breast pump with the message, "PUMP @therhythmsection press day," alongside an emoji of a muscled bicep with the word "Mom" on the post. She also wrote "PUMPS" over her fabulous heeled boots.

Ahead of promoting The Rhythm Section, where Lively plays a mother who loses her entire family in a tragic plane crash, the actress had been staying under the radar since giving birth. And neither she nor her famously funny husband have shared so much as their little girl's name with fans at this point. So the fact that she was willing to share her breast pumping antics while on a press tour felt like a real moment of vulnerability for the actress.

Although perhaps it shouldn't come as any great surprise that she is breastfeeding her third daughter, considering she has been open about breastfeeding her older two girls in the past. Remember the time she shared a photo of herself with daughter Inez in 2016 in Thailand? She captioned that post "the perks of breastfeeding."

Of course, there's every possibility that Lively is simply just happy to have the opportunity to be out without her kids. During an interview on Wednesday morning with Good Morning America, Lively admitted that adding a third child felt like "going from 2 to 3,000."

"We have so many children, we are outnumbered. It's a lot," she told Good Morning America. "People say that from two to three it's the same and easy, those people do not have three kids. It is crazy."

She's not wrong; as someone with four kids, I can tell you the minute you're outnumbered everything changes. Fortunately for Blake Lively, she seems to have a pretty good handle on things at home and, yup, with her trusty breast pump.