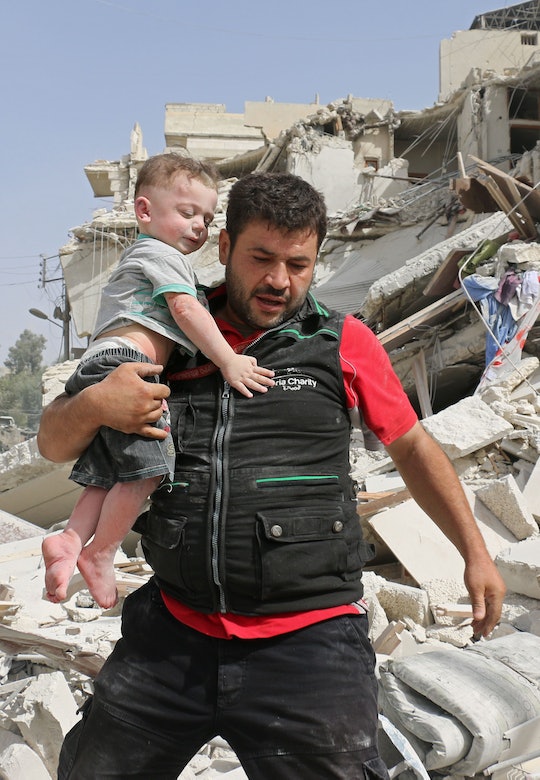 Bombing In Aleppo, Syria Has Resumed, In Case You Forgot

At an MSNBC town hall Wednesday night, Gary Johnson couldn't think of the name of a single world leader he admires. "I guess I'm having an Aleppo moment," the Libertarian presidential candidate told host Chris Matthews, an oblique reference to the now infamous "What is Aleppo?" response to a question about the besieged Syrian city where families sleep in one room so they can at least die together when yet another airstrike unleashes bombs onto their homes. After a brief humanitarian cease-fire agreement, bombing in Aleppo, Syria, has resumed mightily and, again, relentlessly. Johnson's thoughtlessly equating the word "Aleppo" with a brain fart is unacceptable, but also emblematic of our country's unwillingness or inability to face the atrocities that are happening there.

Aleppo is the city where doctors are forced to perform surgery on children without anesthesia amid the backdrop of a civil war that's killed thousands of children and transformed thousands more Syrians into the refugees to whom some U.S. politicians want to close the borders. It's the city that shocked the world with the image of a traumatized and bloodied 5-year-old boy named Omran Daqneesh — who's as old as the war between the Syrian government and the rebels who now occupy the city —  sitting stunned in the back of an ambulance after rescue workers retrieved him from the rubble of an apartment building.

Aleppo is the city where there have been 1,7000 airstrikes since the ceasefire, sponsored by the United States and Russia, which collapsed Sept. 19, according to The Washington Post. That was the launch point for the "most ferocious bombardments yet," as the government aims to recapture Aleppo, where the pre-war population of 3 million has dwindled to just about 250,000 in the eastern part of the city. These bombardments left 96 children dead in five days this week.

Of those left, about 100,000 are children, The Guardian reported. A paltry approximation of 30 doctors remain to treat them when they're injured in bombings, sometimes becoming the sole survivors of attacks that killed their families. As the horror intensifies and resources become less and less available, these doctors have no choice but to select who they will attempt to save and who they must leave to die.

On the same day Johnson used the term "Aleppo moment" to excuse his failure to remember the name of the former president of Mexico, United Nations Secretary-General Ban Ki-moon described the carnage and unalloyed human suffering that is synonymous with the real Aleppo. "Imagine the destruction," he said in a speech, as ABC News reported:

People with limbs blown off. Children in terrible pain with no relief. Infected. Suffering. Dying, with nowhere to go and no end in sight. Imagine a slaughterhouse. This is worse. Even a slaughterhouse is more humane. Hospitals, clinics, ambulances and medical staff in Aleppo are under attack around the clock.

When it's indisputable that a slaughterhouse is more humane than the atrocities plaguing thousands of trapped, hungry, terrified people constantly, it's easy for those of us in other parts of the world to feel hopeless and despondent at the mere notion. What could we possibly do to help?

And that's an understandable response, as well as a tough question to answer. Donating to an organization like UNICEF, Doctors Without Borders, Mercy Corps, and Save the Children, all of which work to save Syria's kids is the most direct option. No one person can singlehandedly stem the suffering in Aleppo, but we need to recognize it for what it is, not shy away from the horror there.