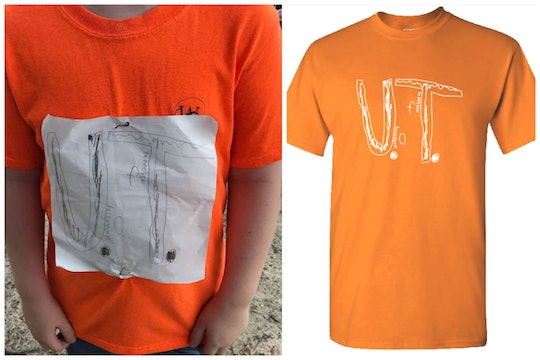 Imagine you are a kid. You want to fit in, we all do. This never ends but when you're a kid all the wanting and yearning for acceptance is new and fresh. And sometimes so terribly difficult. For girls, for boys, for everyone. And especially for a young boy bullied for his homemade t-shirt in Florida. Fortunately, his story has the happiest of endings, courtesy of the University of Tennessee. Would that this were true for every kid.

The young boy was taking part in his elementary school's "College Colors Day" a few weeks ago, which seems like it would be innocuous enough. As the boy's teacher Laura Snyder explained in a heartbreaking Facebook post, he had come to her when she first announced the special day and mentioned that he was a big fan of the University of Tennessee Volunteers team but didn't have a shirt. She told him he could wear an orange shirt to show his support, and it seems he was incredibly excited about the whole event, "He told me every day leading up to it that he had an orange shirt that he was going to wear. So when the day finally arrived, he was SO EXCITED to show me his shirt. I was impressed that he took it one step further to make his own label."

Unfortunately not everyone saw his efforts as impressive. Snyder explained that a group of girls apparently made fun of his homemade t-shirt at lunch and she found him sitting alone at his desk. Head down, crying.

Snyder noted that the boy was understandably devastated, as was she. So she decided to take matters into her own hands. As she explained in her Facebook post, she wanted to make him feel better by getting him a University of Tennessee shirt, but first she wanted to spread the message on social media to see if anyone out there might have a connection at the school. The post went viral, and the Knoxville school caught wind of the bullying incident. And now, thanks to the football team and the Vol shop, this kid is going to be the envy of his school. The university decided to reward this ingenuity by basing a new t-shirt on the young boy's personal design. These shirts are available for pre-order at the Vol Shop, and a portion of the proceeds to Stomp Out Bullying.

As a marketing and fan experience guy, I absolutely love the creativity that he showed there. I think he will go from making his own T-shirts to now being the envy of the school. And the fact that it's in SEC country is a good thing.

Beyond the t-shirt design, the young boy also received a massive package from the University of Tennessee with items for the entire class. Which sends such an amazing message, of course: That ingenuity and creativity will always win out over bullying if people stand up and support each other. That fitting in isn't always the goal. And that kindness and courage will be rewarded.