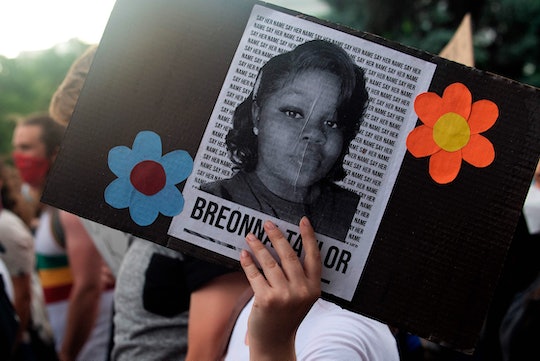 After weeks of protesting and petitions that gathered millions of signatures demanding justice for 26-year-old Breonna Taylor, an ordinance in her name has passed. The vote in Kentucky has been applauded across the nation and Tamika Palmer, Taylor's mother, said "Breonna's Law" will help save lives. And for that, she is "grateful."

On June 11, Louisville city council unanimously voted to ban "no-knock" warrants and require that officers wear body cameras when executing a search warrant. "I plan to sign Breonna’s Law as soon as it hits my desk," Mayor Greg Fischer tweeted on Thursday. "I suspended use of these warrants indefinitely last month, and wholeheartedly agree with Council that the risk to residents and officers with this kind of search outweigh any benefit."

This type of warrant allowed officers to enter Taylor's home in the middle of the night on March 13 without knocking during a raid, looking for a suspect who was already in custody, according to The Washington Post. On the night Taylor was killed, The New York Times reported her boyfriend, Kenneth Walker, fired his gun, which he was licensed to carry, at the plainclothes officers on suspicion that it was a home invasion. Officers fired back 22 times, Taylor was shot eight times, and she later died, according to CNN.

Palmer has been advocating for a ban on controversial "no-knock" warrants since her daughter's death in March and celebrities like Alicia Keys have helped bring attention to her case. Following the passage of Breonna's Law, Palmer said: "Breonna, that's all she wanted to do was to save lives. So with this law, she will be able to continue to do that. So we're grateful for that. She would be so happy."

In an interview with CNN's Anderson Cooper, Palmer said her daughter "would be amazed to see the world changing."

Breonna's Law is a victory, of course, but for Taylor's mother it comes at a cost impossible to bear. "I haven't had time to sit and grieve," Palmer said in an interview with ABC News. "I'm still trying to figure out why my daughter was killed. I'm still trying to figure out, why did it have to come to her being murdered. Why did Breonna have to die?"

Tamika Palmer should have celebrated her daughter's 27th birthday with her earlier this month. Instead, she is upholding her daughter's legacy and fighting to make sure she receives the justice she deserves.