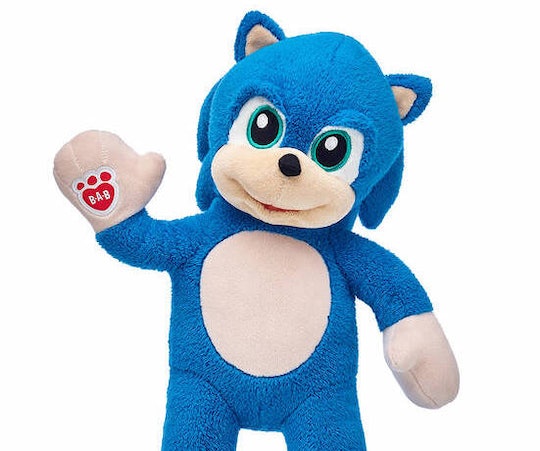 I watched the cartoon version of Sonic The Hedgehog every morning before heading to first grade (one of my many perks of being a third child in the early ‘90s), so I was filled with a heavy dose of nostalgia when I heard that Build-A-Bear now has Sonic The Hedgehog.

More Like This
The Original American Girl Dolls Are Back For Their 35th Anniversary
This Star Wars Gift Guide Is Perfect For Any Fan
These Couches Are Perfect For Climbing If The Nugget Couch Is Sold Out
18 Best Sand Toys In 2021 For Babies, Toddlers, & Kids

I thought we’d reached peak Build-A-Bear with the addition of a lion swilling champagne, but the brand keeps on giving and here we are with the cutest, bluest hedgehog around. This cuddly release comes on the heels of the latest Sonic The Hedgehog movie, starring Jim Carrey, which is based on the video game franchise by Sega.

Proving that small things can be fierce, Sonic can run at, well, supersonic speeds and he always does so in his signature bright red sneakers. Polygon reached out in 2019 to veteran Sonic the Hedgehog game producer, Takashi Iizuka, who confirmed that, “Sonic doesn’t take off his shoes (in canon).” This does not sound comfy. The folks at Build-A-Bear are shaking things up a bit, as this plush doll marks one of the first times that Sonic has been seen barefoot.

Rest assured, the 17-inch Sonic Build-A-Bear still has the famous red soles even on his bare paws. And if you’re a canonical purist, don’t worry, you can also buy Sonic some red kicks for just under $10. The Build-A-Bear collection also includes the sweetest Sonic PJs, plus a sound chip which utters five phrases from the movie every time it's pressed. And like all Build-A-Bear plush animals, you have the option to make Sonic smell like Thin Mints (basically my ultimate childhood nostalgia mashup) among other yummy scents. But be sure to move quickly because just like Sonic himself, these iconic Build-A-Bears are going fast. (In fact, at the time of this writing, Sonic appears to be sold out on the Build-A-Bear website, but you can still check out store locations while waiting for the site to restock.)