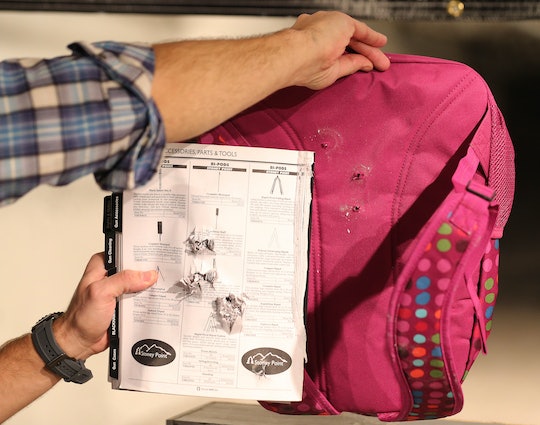 Shoppers at Office Max and Office Depot have recently noticed displays of “bulletproof” backpacks alongside the back-to-school supplies. Some parents have purchased these products for their children, but what do teachers think of bulletproof backpacks? Romper spoke with educators to understand how the people responsible for our children when they’re at school feel about this option.

"It makes me nauseous. The entire concept," says Alison Friedman, an elementary-school art teacher in California. "And I also think they’re impractical. Kids hang their backpacks outside on hooks, so there is a tiny window of time during which they’d even be useful which is arriving or leaving class."

"Any semi-automatic weapon can demolish them," agrees Dina Ley, a high school teacher in Philadelphia. "[And] only affluent families can afford them... So, basically, they are providing a false sense of safety for rich parents."

While many parents will buy a backpack marked "bulletproof" (which generally cost between $100 to $200, according to a recent report from The New York Times) imagining they will protect their children from shootings like those in Parkland and Sandy Hook, the truth is that they can't. Some companies claim their products have been rated rated Level IIIA by the National Institute of Justice, a rating that indicates protection against ammunition fired from longer barrel handguns (not rifles, such as the AR-15 or AK-47), but Justice Department spokesman Devin O'Malley clarifies "The National Institute of Justice—the research, development, and evaluation agency of the Department of Justice—has never tested nor certified ballistic items, such as backpacks, blankets, or briefcases, other than body armor for law enforcement. Marketing that claims NIJ testing or certification for such products is false."

Another criticism teachers had for the backpacks was more an issue of principle: while they may provide some protection against bullets, they do nothing to address the issue of systemic gun violence.

"I think other measures should be taken so that kids don’t need those! Like prevent the wrong people from getting guns and bringing them into school," says Katie Olney, an instructional coach in Massachusetts.

Ley suggests that taking lobbying out of government would go a long way toward meaningful effecting meaningful gun control laws. "Gun violence doesn't directly affect any of these people who make decisions in Congress," she says, "so we are stuck with politicians who can't even relate to this public health crisis, which is what gun violence should be considered."

All of the educators who spoke with Romper were trained in preparedness drills — ranging from shelter in place to ALICE training, the Alert, Lockdown, Inform, Counter, Evacuate response to active shooter situations — but spoke of their assorted shortfalls as well as the ambivalence and anxiety they felt about them.

During the drills, I am crawling out of my skin.

"It's difficult to reconcile the thoughts of, 'This is absolutely ridiculous' and, "This is necessary,'" Ley tells Romper. "During the drills, I am crawling out of my skin. The students don't always take them seriously, but I have to make sure they do take it seriously and that is very emotionally draining."

"In my experience, [students] don’t seem to react differently than the fire or earthquake drills," Friedman says. "The same does not go for me! ... over and over again in [my] head it’s usually, 'I am going to die at work?'"

In some states, teachers are being empowered with the right to bring guns into the classroom to protect students in the event of an active shooter situation. In 2018, Education Secretary Betsy DeVos publicly considered whether federal funding to arm and train teachers was allowed under prescribed guidelines. Florida recently joined the roster of states that allow teachers to carry guns in the classroom.

But according to Everytown For Gun Safety, both the American Federation of Teachers and the National Education Association oppose arming teachers. A 2018 Gallup poll showed that 73% of teachers questioned were opposed to being armed in their classroom. In March of this year, Connecticut representatives Congresswoman Jahana Hayes and Senator Chris Murphy introduced resolutions in the House and Senate that would specifically prohibit federal funding of arming or training teachers. "Teachers have way too much to do today as it is," Murphy said in a press conference explaining the resolution. "They don't need to be marksmen and go through the training for that."

"I think that is such a bad idea, and for so many reasons," agrees Olney. "I think it would be traumatic for students to see their teacher in that role should the need every arise. Logistically it doesn’t work: if I teach on the third floor and the issue is in the basement, do I leave or move my students?" More helpful, she suggest, would be additional resources for schools and educators, including social workers to help identify and form relationships with at-risk students, as something she would like seen remedied to help combat gun violence. (Most recently, the Trump administration proposed a $7.1 billion cut to the Department of Education in 2020.)

"Arming teachers is not an acceptable response to our national gun disease," says Friedman. "[It] sends a message that we don’t have a problem that needs fixing at its root ... [and] is not safe for the teacher or her students. ... I can speak for myself that if being armed was a job requirement, I would select a new career immediately as I have no interest in carrying and shooting a gun, especially in ... my classroom."

While no state requires teachers to carry a gun in school, the opportunity suggests a role for teachers that goes far beyond the scope of traditional pedagogy, as do, some may argue, special active shooter training in and of itself.

"I am expected to put my life on the line," says Ley. "I am not at all comfortable with that."

This is not the first time defensive school gear has been made available, yet mass shootings continue to plague the country. Joe Curran, founder of BulletBlocker, a 12-year-old bulletproof equipment manufacturer, told Money.com that he saw sales of bulletproof backpacks and inserts increase as much as 300% after the shooting at Stoneman Douglas High School in Parkland, Florida, on Feb. 14, 2018. And the recent mass shootings in El Paso, Texas, and Dayton, Ohio, have pushed the item back into consideration for many parents.

"I hate how so many people are like, 'Well, these are the times we live in now. It's unfortunate, but it is what it is,'" says Ley. "Don't just become complacent. ... This isn't normal."

This article has been updated to include a public statement from Justice Department spokesman Devin O'Malley.

More Like This
Over 10,000 Sippy Cups & Bottles For Toddlers Recalled Due To Lead Poisoning Hazard
21 A+ Christmas Gifts For Teachers
My Toddler Ate Play-Doh, What Happens Now? Don’t Freak Out
The Best Toys For 3-Month-Olds