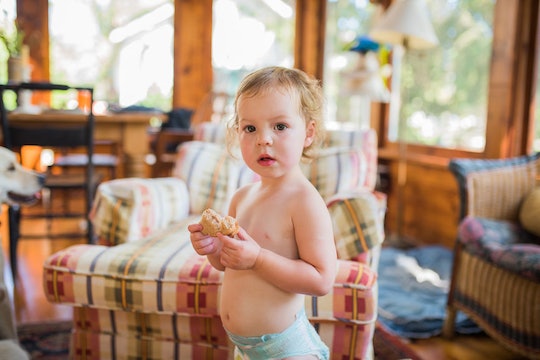 Not Every Kind Of Tuna Is Safe For Toddlers, So Follow These Guidelines

My husband has loved tuna since he was a child — so much so that his mother used to offer it as a bribe. ("Let's go shopping." "No." "I'll buy you a tuna sandwich afterward." "Okay.") She even managed to get him to eat cod and flounder by telling him it was tuna. Today, however, she might think twice. With the concern over mercury levels in fish, moms today are asking whether it's safe for toddlers to eat tuna. Are we taking a serious health risk when we serve the very food generations of kids have grown up on?

The good news is that you don't have to throw out your cans of Bumble Bee. Although nearly all fish today contains at least a small amount of mercury (thanks to the pollutants we dump into the world's waterways on the regular), certain varieties are less contaminated than others. This can help you make smart choices when shopping for your next fish dinner.

"Fish is very healthy for young children, and I recommend parents get their children 6 months and older used to eating fish," says Tanya Altmann, MD, a Los Angeles-based pediatrician, bestselling author, and spokesperson for the American Academy of Pediatrics. "Many families and kids like tuna, and my own family will eat it once a week."

Dr. Altmann's recommendations are in line with those of the FDA, which says that fish is an excellent source of protein, along with B vitamins and essential minerals such as selenium, zinc, and iodine. Fish also contains omega-3 fatty acids, a healthy polyunsaturated fat that plays a part in brain development, per the National Institutes of Health. Supplements aren't as effective as fish at providing these essential fats.

However, because fish and shellfish are common allergy triggers, the FDA recommends that they be introduced only after children reach the 6-month point, and then, parents should watch closely for signs of an allergic reaction: hives or rash; difficulty breathing; flushed skin; vomiting or diarrhea; and/or swelling of the lips or tongue.

Because children under 5 are at risk of health and developmental complications from ingesting too much mercury, the FDA has compiled a guide to fish according to mercury levels. Canned light tuna is one of the varieties considered "Best Choices," or the lowest in mercury. It's safe for children and adults to eat this and other "best" fish two to three times a week. Canned and fresh albacore and white tuna are among the "Good Choices" fish, which can safely be eaten once a week.

Among the "Choices to Avoid," which contain the most mercury, is bigeye tuna. It's not the type you normally find in canned tuna; however, it's one of the two species of tuna called "ahi" that you might find in a Japanese restaurant. (The other species, yellowfin, is among the FDA's "good choices.")

"It's best to limit tuna to just two or three times a week of an appropriate child or toddler-sized serving," says Dr. Altmann. That translates to about 2 ounces, or the size of your child's palm. So keep an eye on the amount of tuna salad you spread on the sandwich bread.

This all applies, by the way, to fish either canned commercially or served in restaurants. For families who want to eat fish they (or someone they know) caught on their own, the FDA cautions checking for fish advisories in that area regarding eating locally-caught fish. If there's no advisory, it's best to eat just one serving of the fish, and to avoid eating any kind of fish for the rest of the week.

As with most things in life, the key is moderation. A tuna sandwich or a small portion of cooked fresh tuna a couple of times a week can be part of a toddler's healthy diet; a daily serving of tuna, though, is too much of a good thing. Offer a variety of lunch and dinner choices, and your child should get the nutrients they need without the risk of excess mercury.