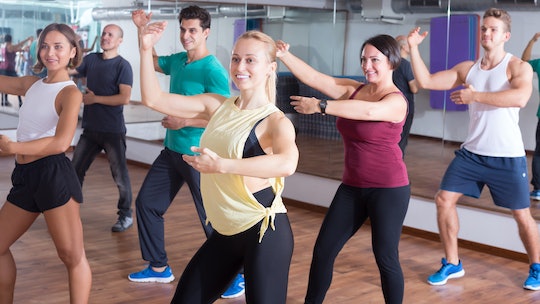 Can You Do Zumba During Pregnancy?

Zumba has now established itself as a permanent fixture in the cultural landscape — women everywhere have embraced this fun, community-oriented dance workout class as their primary means of staying physically fit. But should that change during pregnancy, many wonder? Can you do Zumba while pregnant? Romper reached out to an instructor for insight.

Carissa Izquierdo, who has been teaching Zumba classes for three years, tells Romper it is absolutely safe and healthy for a woman to continue doing Zumba after becoming pregnant and throughout her entire gestation. The key lies in making the appropriate modifications.

"Exercising during a pregnancy can be healthy and beneficial," says Izquierdo. "Zumba is a pretty high intensity cardio class that involves quick footwork, squats, jumping, and a ton of hip movements, and just like modifying moves because of an injury, modifying while pregnant is just as easy."

If a song is fast and has complicated footwork, she advises opting out of the double-time and cutting everything in half. If the instructor is having the class do squat jumps, don’t jump, she advises, just squat. Instead of running in place, try marching. Instead of leaping from side to side, take easy side steps. The bottom line, Izquierdo tells Romper, is to listen to your body.

Pregnant women should be especially careful about staying hydrated and resting during workouts as much as needed. And as with any form of exercise during pregnancy, Zumba is safest for those who were already participating in the workout before conception. If you haven't done it before, but are itching to try out a new style of fitness, get the green light from your medical provider and your class instructor before jumping in.

But if you're an old pro at this dance workout, there's no need to bow out early. In Izquierdo's words, "If you were shaking your booty at Zumba before you were pregnant, continue to shake your booty during your pregnancy, modifying where needed." I think that's enough said.