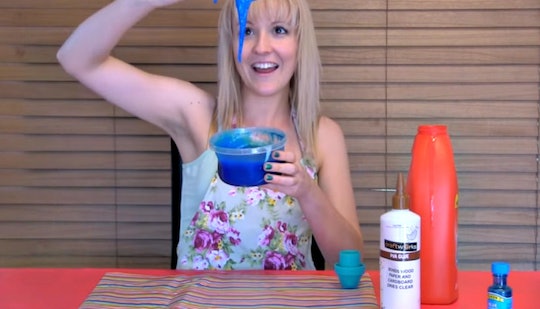 How To Make Slime With Wood Glue

Kids have been fascinated with slime for years. Even as far back as the '80s, I longed to be on the set of Nickelodeon's You Can't Do That On Television just so that I could have the famous neon green slime dumped on my head. Unlike most elementary school obsessions of the early 21st century (Silly Bandz, Rainbow Loom bracelets), the DIY slime craze has yet to die down. In fact, there are now more ways than ever to make slime, most of which include school glue. But, can you make slime with wood glue instead?

More Like This
The 7 Best Water Tables For Your Little Ones
The Best Splash Pads For This Summer
18 Best Sand Toys In 2021 For Babies, Toddlers, & Kids
Best Montessori Learning Towers: 11 Kitchen Helper Stools For Toddlers

According to Explorable, you can use white wood glue to make slime in the same way you would use white school glue. There are several different easy-to-follow slime recipes and video tutorials available online, most of which require the use of Borax. As the green living website Small Footprint Family noted, Borax is a naturally occurring mineral found in concentration in dried salt lake beds, consisting of water, sodium, boron, and oxygen. Borax is most often used as a laundry booster, but its popularity has soared with the increase of kids and teachers making homemade slime.

Although Borax is considered generally safe, CBS Philly recently reported on an incident involving an 11-year-old Massachusetts girl who was rushed to the emergency room after having a severe allergic reaction to Borax has parents concerned. According to CBS Philly, doctors determined that Kathleen Quinn suffered second- and third-degree burns and blisters on her hands due to extended exposure to Borax. Borax should only be used diluted and under adult supervision, but many parents are steering their children clear of the mineral altogether.

Parents know that most kids tend to put their play things – or at the very least their hands – into their mouths. Because of this, you might want to consider safer alternatives to slime including some recipes for edible slime. Did someone say Nutella slime?