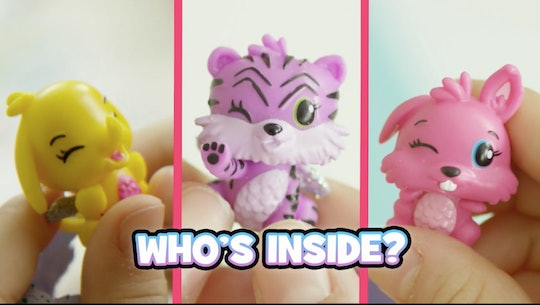 Here's How To Pre-Order The Hatchimal Minis

Pity the parents whose children have a birthday coming up in May. That's because, if the craze that exploded over the original Hatchimals toy last year is any indication, the soon-to-be-released iteration of the international sensation will be at the top of their kids' wish lists. And history shows that the Hatchimals CollEGGtibles collection may very well go out of stock for a long stretch. That's how Hatchimals became the bane of many parents' existences over the holidays, at least. To try to avoid the stress and the hassle, here's how you can preorder those cute Hatchimal minis.

Toronto-based Hatchimals creator Spin Master is capitalizing on its runaway success with the self-hatching toy by releasing two new versions: the CollEGGtible series and Hatchimals Glitter. The original Hatchimals were sold out for pretty much the entirety of the holiday season, leading some of those who wanted to gift them to the little ones in their lives to turn to third-party sites like eBay to pay much more than the $59.99 retail price. Christmas and other such mass retail holidays won't be an issue when "Season One" of the CollEGGtibles series comes out May 1, but buying the toy ahead of time could still very well save parents some headaches down the road. Luckily, that's easy to do on Amazon.

While their ability to hatch from their eggs all by themselves (mostly) and interact with kids were two of the big draws of the original Hatchimals, the CollEGGtibles are a different breed, so to speak. The 70 different creatures that will make up the collection, at least initially, will need kids to free them from their speckled eggs, and they're made of plastic. They're reminiscent of Pokémon cards in the sense that children won't know exactly which of the creatures they have until they hatch the egg. And they can be categorized as common, ultra-rare and limited edition, making trading with friends and a never-ending desire for more inevitable.

According to CNN, the Hatchimals CollEGGtibles will sell for $2.99 for a single pack and $9.99 for a pack containing four. On Amazon, parents can snag lots of combinations of the CollEGGtibles (they come in families: Giggle Grove, Lilac Lake, Polar Paradise, and limited edition Cloud Cove). They'll want to act fast, though, because stock for some of these is already dwindling.

It's impossible to know for sure, of course, that the CollEGGtibles will be as much of a hit with kids as the original Hatchimals were. Still, they're affordable enough that purchasing a pack or two ahead of release will be an easy way to delight kids this spring.