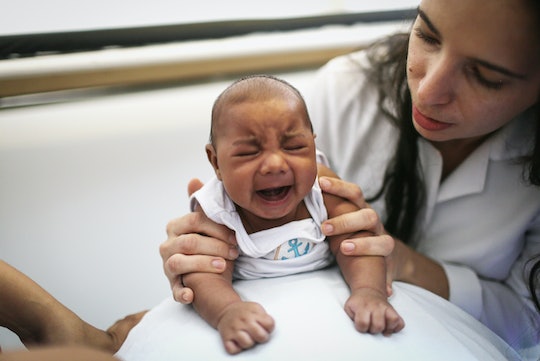 Can Zika Remain Dormant In Your System? The Virus Leaves The Bloodstream Fairly Quickly

It's common knowledge, now, that the Zika virus is especially deleterious for pregnant women because of the devastating effects it has on their unborn babies. It's hyper-contagious and has been linked with both microcephaly, which manifests itself with unusually small heads and brain damage in infants, as well as an autoimmune disorder called Guillain-Barre syndrome. In the midst of an outbreak that's unprecedented in this part of the world, the Brazilian government has even asked women to delay getting pregnant. The mosquito-borne virus is now beginning to infiltrate the United States and its territories, raising serious concerns for women here who are pregnant or who may become pregnant. A woman who learns she's pregnant may be rightfully concerned that she's carrying the virus, even if she hasn't shown any symptoms, especially if she has traveled to an infected area. So, can Zika remain dormant in your system?

Adults who contract Zika — either from a mosquito bite or, less frequently, through unprotected sex — oftentimes experience either no symptoms or mild ones, like a fever, rash, or body aches, though it's been linked to neurological disorders as well. And Dr. Anne Schuchat, principal deputy director of the Centers for Disease Control and Prevention, recently said Zika is even "scarier" than it was originally believed to be, as it is also now associated with prematurity and eye problems in infants.

Schuchat also noted that the mosquito that carries the virus is present in about 30 states in the continental United States, many more than the 12 in which it had previously been identified.

For this reason, expectant parents will likely be extra-vigilant and worried that the virus may be lurking in a pregnant woman's bloodstream, long after she's caught it. Thankfully, it seems that Zika doesn't tend to linger, CNN's chief medical correspondent Dr. Sanjay Gupta said in an interview this past January:

It appears not to stay too long. The virus is usually gone from the body in five to seven days. The only way to tell if you have antibodies. There is no evidence to suggest it would lie dormant and pop up again. If you get it, you likely won't know, will have mild symptoms and then will be immunized.

Although no vaccine exists to prevent Zika, the CDC suggests that people exposed to the vector mosquito should take cautionary measures like wearing long sleeves and pants, using insect repellant, and sleeping under mosquito nets. It's also worthwhile for Americans to push Congress to invest in appropriate resources that will protect us against the ever-more-dangerous virus.

Zika has the strength to significantly change the health and developmental outcomes for an entire generation of babies being born right now, so it is imperative that scientists and health officials continue to collect and disseminate information, and that governments do everything possible to keep citizens, including those who haven't yet been born, safe. But for now, at least, women looking to plan their families should rest easy knowing that even after exposure, their chances of passing on the virus, months down the line, are slim to none.