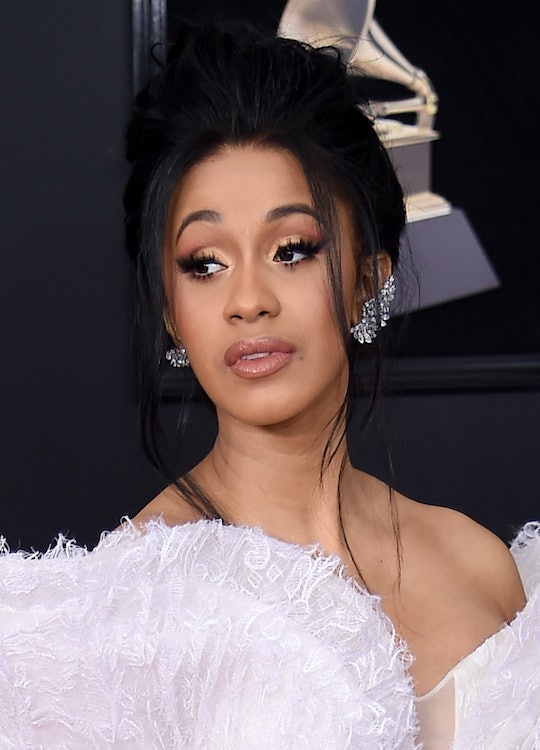 Cardi B Gets Candid About Postpartum Depression Coming "Out Of Nowhere"

Cardi B doesn't care what people think of her, this we know for sure. I mean honestly, the next time you feel yourself getting overwhelmed by negativity in your life, listen to some Cardi B and feel inspired. The rapper doesn't pretend she's perfect, but she's confident. She knows who she is, deep down in her bones. Which is why some of the more difficult aspects of motherhood came as something of a surprise to her. In fact, in a new interview with Harper's Bazaar, Cardi B got candid about postpartum depression and her struggles with breastfeeding, and even the Queen of Confidence herself was caught off guard by it all.

Last July, the "Money" singer welcomed baby girl named Kulture Kiari with then-husband, Migos rapper Offset, according to E! News. In the months since giving birth to her little girl, life has changed a lot for Cardi B.

First of all, 2018 saw her go from superstar to basically the biggest act in music all over the world. Second, she and Offset separated in December after persistent rumors of infidelity on his part, as ELLE reported. And let's not forget she gave birth for the first time ever and was trying to adjust to that.

And as she shared with Harper's Bazaar, things got to be a little too much for the tough-as-nails singer, and it really took her by surprise.

As Cardi B told Harper's Bazaar in a new interview, she thought she would feel fine after Kulture's birth. "I thought I was going to avoid it. When I gave birth, the doctor told me about postpartum, and I was like, ‘Well, I’m doing good right now, I don’t think that’s going to happen.’ But out of nowhere, the world was heavy on my shoulders," she told the magazine.

The "Bodak Yellow" singer admitted that she was walking around in a postpartum depression "haze" after giving birth. She even gave up on touring with Bruno Mars because she simply couldn't cope.

According to Good Morning America, the new mom wrote in a July statement, "I thought that after giving birth to my daughter that 6 weeks would be enough time for me to recover mentally and physically. I also thought that I’d be able to bring her with me on tour, but I think I underestimated this whole mommy thing."

Postpartum depression affects at least one out of every 10 new moms, according to the Centers for Disease Control and Prevention, and those are just the ones who seek help. And as Cardi B learned, unfortunately, no one is able to truly predict who will struggle with it.

Even now Cardi B is having a difficult time feeling like herself in her own skin. In her candid interview with Harper's Bazaar, she said:

For some reason, I still don’t feel like my body’s the same. I feel like I don’t have my balance right yet. When it comes to heels, I’m not as good at walking anymore. I feel like I’m holding a weight on me. I don’t know why because I’m skinnier than I’ve ever been. But there’s an energy I haven’t gotten back yet that I had before I was pregnant. It’s just the weirdest thing.

As for other aspects of parenting, Cardi B was her usual refreshingly honest self. Despite the fact that she was apparently breastfeeding daughter Kulture in the video for "Money," she told Harper's Bazaar she is no longer breastfeeding because "it was too hard."

Breastfeeding is obviously not for every mom, it can be a struggle. Some women have a difficult time with latching, with their milk coming in, and that's OK. I think it's important to respect each person's right to choose without dealing with outside societal pressures.

The singer seems to be getting her bearings again with her daughter. Apparently feeling a bit better and able to enjoy time just doing regular things with her baby. Things like introducing her to the crazy world of "Baby Shark," which is a real indicator of normalcy.

Ultimately, Cardi B's openness about her own struggles sends an important message that a woman as famously strong and outspoken as her is not immune to the trials and tribulations of motherhood.