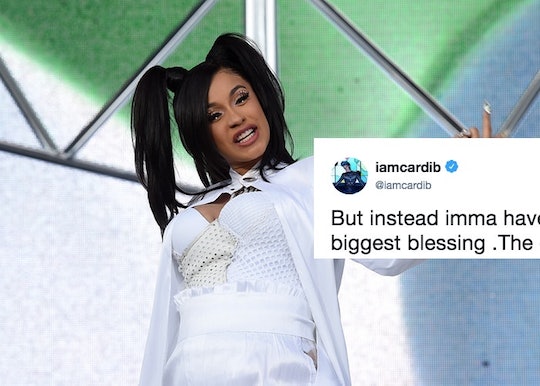 As soon as Cardi B announced that she was pregnant earlier this year, people began hating on her. You can't be one of the most famous rappers in the world and not expect haters to hate. Luckily, the Bronx native isn't afraid to take people on and stand up for herself when necessary. And Cardi B's response to someone criticizing her pregnancy recently is no different.

In a now deleted tweet, someone reportedly wrote that Cardi was at the top of the world until she got pregnant, as reported by BuzzFeed News. The Twitter user wrote, according to BuzzFeed News, that Cardi "would be goin' on tour right now, performing at the BET awards" and getting money." They added, "But instead Offset got her pregnant."

The idea that a woman can't have a successful career and want to be a mother is one of the oldest, most sexist criticisms in the book. Cardi took note, as she does when anyone has something negative to say about her.

She replied to the person who thought she should be out touring that "instead" she was going to have the "biggest gift" and "biggest blessing." Cardi added that her baby is going to be the one person she'd "always be perfect too [sic]." The rapper even shared that when she was feeling depressed recently, she looked down at her bump and "got happy and motivated again."

Cardi added in another tweet that no one should be concerned about her cashing in on her success, thank you very much. "And let me tell you something, I’m still getting this money ... If only you know these deals I signed... You soon find out."

Not only is it just sexist and irritating to suggest that Cardi has to stop working since she got pregnant — it's also just plain wrong. Although she's cancelled performances in the past few months, she was on Saturday Night Live the night she announced her bump, she's made late night talk show appearances, performed at Coachella and Broccoli City Fest in D.C.

She posts hilarious Instagram Stories almost every day, and everyone knows that that's the most important thing these days for a celeb. She's released music, promoted it like a madwoman, and is on the cover of Rolling Stone. She even opened up about the shoot on Instagram this week saying that she fainted during the last shot:

My baby don’t like when I stand up straight for more then 20 seconds, I automatically get lightheaded. Ladies did that ever [happen] to you while pregnant? It’s the weirdest thing.

So, Cardi B might have cut back a bit, but she was working like the Energizer bunny right up until she announced her pregnancy. So this whole "cutting back" thing just means she's working like 22 hours instead of 24. Whoever said she's not able to work and be pregnant obviously doesn't know much about Cardi.

Also, let's stop talking about her child having a negative effect on her career. Yes, being a mom is hard and it's not easy to figure out how to manage one's career with having kids. But women (and their partners) always figure out what works best for them. Being a good mom and being successful in professional life are not mutually exclusive. This isn't the first time Cardi's dealt with BS like this, either.

Back in April, when she has just announced her pregnancy, she made an appearance on Power 105.1's The Breakfast Club and talked about some of the trolls taunting her about the demise of her career. As reported by The Guardian, Cardi said:

It just really bothers me and it disgusts me because I see a lot of women online like "I feel sorry for you. your career is over" and it's like why can't I have both? Why do I gotta choose a career or a baby? Why can't I have both. I want both.

Whatever Cardi wants, Cardi is obviously going to get. So lay off her everyone, alright?