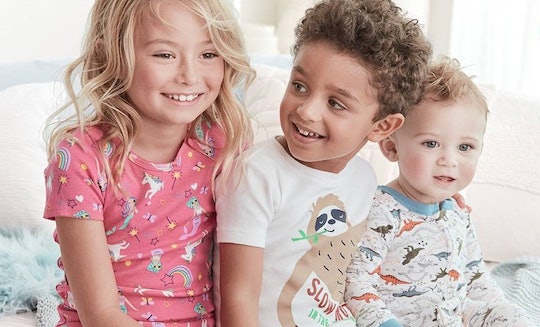 Every parent knows that Carter’s not only has some of the cutest clothing and pajamas for babies and kids ever, but they also have killer sales and doorbusters on the reg. So it pretty much goes without saying that the Carter’s and Oshkosh Presidents' Day sales should not be missed (unless you for some reason don't want to save a bunch of money on your kid's wardrobe and accessories).

In case you didn't know, Oshkosh B'gosh is a Carter's brand, and for Presidents' Day, both labels will be offering major markdowns. From February 11 through February 18, Carter's will be taking 50 to 60% off everything on the site and in the store except for swim, sandals, and certain doorbuster prices; from February 11 through February 17, OshKosh will do the same, a press release explained. Oh, and you can also order sale items online and pick them up in-store if need be. Pretty sweet.

Even though this sale excludes some spring and summer favorites, you can stock up on pajama sets (they are “America’s favorite jammies,” after all), onesies, hoodies, graphic tees, bodysuit pant sets and other footwear. And who can forget about those famous OshKosh overalls that we all wore back in the '80s and '90s? I had some pink corduroy overalls that were quite the fashion statement back in kindergarten, thank you very much, so I was thrilled to see that they're still in style.

Even if you think your little one is all set for the season, it's worth stocking up on the next size for next year when prices are this low. And just imagine how happy you'll be next fall or winter when you already have a drawer full of brand new clothes that aren't too short in the sleeves or legs.