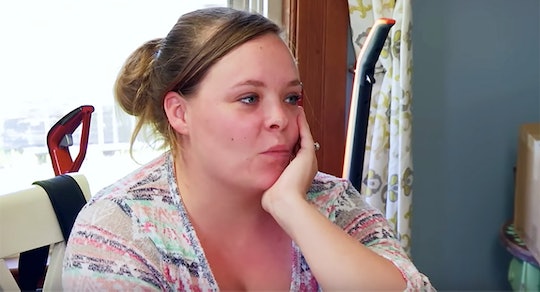 Catelynn Lowell Opens Up About Her Pre-Delivery Jitters On Instagram

Teen Mom OG star Catelynn Lowell is set to give birth to her third child in a few weeks or so. And ahead of the exciting delivery, Catelynn shared a pregnancy update that's pretty darn relatable. Apparently, the mom is feeling a bit anxious these days — but the reason for her nerves might not be what you'd expect.

Ever since announcing her pregnancy in September 2018, Catelynn has shared a ton of updates about her new journey with fans. As for her most recent update? She took to Instagram on Wednesday, Feb. 20 to express how she's feeling ahead of the birth.

"38 weeks tomorrow!!!!!" she captioned a snap of her pregnancy tracker. "It’s getting so close! I’m beyond anxious to meet her and hold her!!!! #momofgirls #blessed."

TMOG viewers are probably already aware that Catelynn struggles with anxiety. "I started having really bad anxiety in the mornings. I guess I'm just kind of hiding it," she admitted in a clip of an episode of the show that aired in April 2018. "Or I'll take a half an Ativan or something, just to make it through the first morning, or half the day ... Obviously my meds aren't working. I had to force myself to get in the shower, and put makeup on."

But this probably wasn't the type of anxiety Catelynn referenced in her Instagram post. The anxiety Catelynn is feeling right now may actually stem from excitement and happiness, which is completely normal. Sometimes it's easy to forget that anxiety can co-exist with positive emotions.

Midwife and mother Diana Spalding touched on these common pre-birth jitters in an essay for Motherly, writing:

It's okay to feel nervous. Or worried. Or excited. Or overjoyed. Or unsure. Or a big tangled web of all of those things. You are not alone, and it's OK. If you can, try not to push those feelings away — be in them, even if it feels messy. Emotions are a very real and important part of this journey, and being nervous doesn't make you weak, it makes you human.

It's also worth noting that Catelynn's feelings are probably heightened at this time given her difficult past. Not only did she and her husband, Tyler Baltierra, place their first daughter up for adoption, but she miscarried before conceiving baby number three.

Oh, and did I mention she struggled with postpartum depression? Mama has been through a lot.

The good news is Catelynn has a lot to look forward to these days. Baby number three — another girl — is set to arrive on March 6. The parents have already named the baby Tezlee, according to MTV.

Making matters even sweeter? She and Tyler are already planning on their next child, who they hope will be a boy. "Yes, Tyler and I both want a boy, so we’re definitely gonna try again," Catelynn shared during an Instagram live stream, according to Us Weekly.

Ahead of Catelynn giving birth, I'm sending all of the positive vibes her way. This is an exciting and nerve-wracking time for the mom, and she deserves all of the support she can get right now.

More Like This
7 Surprising Old Wives' Tales About Christmas Eve Babies
40 Fantastical Boy Names That Start With “F”
14 Free, Printable Birth Plan Templates For Every Kind Of Delivery
Yes, It’s Possible To Get Pregnant If You Have An IUD