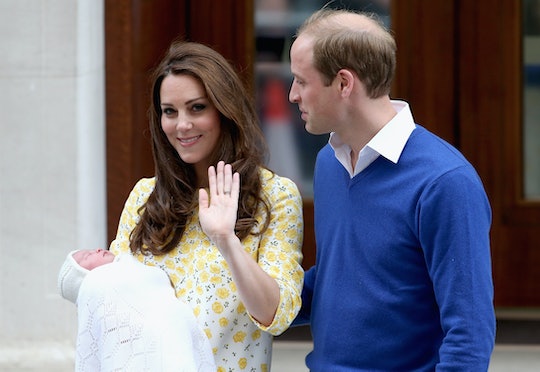 Until having my own children, I never felt comfortable asking mothers to describe their birth stories. It was as though I'd drawn a veil over pregnancy, labor, and even the postpartum period, having internalized the belief that these were private, intimate moments in a person's life, rather than suitable topics of conversation over coffee. Though I cannot remember whether I was ever explicitly told that there was something shameful, or embarrassing, about birth itself, I was definitely taught that there was something shameful, and embarrassing, about menstruation, sex, and reproduction. So, I never asked questions, and no one ever volunteered answers. When I learned that I was pregnant, I instead did what I imagine many millennial-parents-to-be do: I turned to the internet, and specifically to celebrity birth stories.

There are a few that stick to mind to this day. "It was very easy," actress and musician Hilary Duff told People. "I went into labor at about one in the morning and I very calmly had my bags packed and woke my husband up after about three hours of walking up and down my hallway. Then I'm like, 'OK, it's time to go, let's go now.' We got in the car and drove to the hospital and that was it."

Then there was Angelina Jolie, who told Vanity Fair she found giving birth "a fascinating miracle of what a body can do [...] We were in this little hospital in Africa when Shi was born. I don't think there was anybody else in the hospital. It was just a little cottage, the three of us. It ended up being the greatest thing."

In 2013, Beyoncé told Marie Claire that the maternal instincts she began feeling when she was eight months pregnant with Blue Ivy in 2012 helped dull the pain come labor. "I felt like when I was having contractions, I envisioned my child pushing through a very heavy door. And I imagined this tiny infant doing all the work, so I couldn't think about my own pain [...] We were talking. I know it sounds crazy, but I felt a communication."

Although there were some slightly less dreamy and romantic tales out there (like model Miranda Kerr telling InStyle Australia, "I actually thought I was going to die at one point and left my body. I was looking down on myself, the pain was so intense," as Digital Spy reported), most of the anecdotes I was encountering depicted birth as wholly ethereal. Sometimes even painless.

There was mostly good stuff — little references to the pain here and there, sure, but shadowed by the theme that the human body is incredible and birth is a glorious miracle.

The cherry on top of the perfect birth cake was seeing photos of Kate Middleton, the Duchess of Cambridge, posing for the paparazzi merely 12 hours after giving birth to her first child in 2015. Middleton's hair was shiny and smooth — not a strand out of place. Her makeup was pristine. She was in a beautiful dress and heels. There were no signs of damage.

Even though I had never spoken to the women in my life about their birth stories, I wasn't entirely naive to the supposed agony of the ordeal. Listicles had told me that childbirth is one of the most intense pains a human body can experience. Any depictions of labor I'd seen in film or television usually came with lots of screaming and cursing and threats to dump whoever was responsible for the impregnation. As I read through celebrity birth stories, however, there was mostly good stuff — little references to the pain here and there, sure, but shadowed by the theme that the human body is incredible and birth is a glorious miracle.

I don't doubt that when a lot of celebrities describe birth as glorious, miraculous, beautiful, empowering, and magical they are trying to be candid. Or at least as candid as their media training allows. I don't doubt that when a lot of mothers talk about birth this way they mean what they're saying. Birth is, indeed, a phenomenal show of strength and biological wonderment. Seeing one's baby or the first time is, indeed, indescribably mind-blowing. I would never deny that there was tremendous beauty to both of my labors.

For many of us, though, it's also messy. It is full of pain so terrible that there are simply no words to describe it. It is marked by blood and sh*t and all manner of bodily fluids we didn't even know we had inside us. For some of us, it's dangerous. It feels like a matter of life and death, because it is. For others, it's so exhausting and physically catastrophic that our bodies and minds do not recover for months, if not years.

Their words become useless unless they also acknowledge what factors helped it be so stress-free.

There are privileges that come with being a celebrity: With having teams of stylists and makeup artists at the ready all day, every day, even during and immediately after labor; with having enough money to afford the best obstetrics care out there; with having support in the form of nannies, or housekeepers, or people who's job it is to simply make your life easier. This privilege undoubtedly seeps into the pregnancy and labor experiences for many who possess it, meaning that no matter how candid a celebrity might think they're being when they talk about their stress-free birth, their words become useless unless they also acknowledge what factors helped it be so stress-free.

Since having my first daughter, and even more so since having my second, I have spoken to women about their birth stories regularly. I have actively worked to share my own tales, particularly because my first birthing experience was so different to my second. The first was long. There were days of pain. There were complications with my epidural that would lead to months of severe back pain. My vagina tore open. For weeks, I could not walk, or sit on a dining room chair, without crying. I don't think I wore makeup for two months after my daughter was born. I doubt that I washed my hair more than twice. I remember looking at the birthing room while being wheeled out of it, thinking it looked like the site of a crime; not a miracle.

We cannot fuel the narrative that birth is "easy" or "painless" or that we should be expected to look our best on the same damn day we had a baby.

The second time around was much faster. Active labor lasted four hours, as opposed to nearly three days. The pain was more intense, but it was shorter. I couldn't even get an epidural because it all happened so quickly. Because of the lack of drugs, I felt each of my baby's limbs leaving my body. I was amazed that I could get up on my own and walk around the room not even an hour after giving birth. I felt more physically well than I had anticipated, even if mentally, I was just as shattered.

Over two years since first experiencing labor, there are still very few celebrity birth stories out there that I can relate to, or that I'd advise a mother-to-be to check out. When pushed to think about it, it may only be Keira Knightley's description of birth in her essay "The Weaker Sex," which appears in Scarlett Curtis' collection of essays Feminists Don't Wear Pink (And Other Lies), that remotely rings true.

"My vagina split," she wrote. "You came out with your eyes open. Arms up in the air. Screaming. They put you on to me, covered in blood, vernix, your head misshapen from the birth canal. Pulsating, gasping, screaming. You latched on to my breast immediately, hungrily, I remember the pain. The mouth clenched tight around my nipple, light sucking on and sucking out. I remember the sh*t, the vomit, the blood, the stitches. I remember my battleground. Your battleground and life pulsating. Surviving."

Even though birth is, in fact, a terribly intimate, personal matter — one that differs drastically not only from mother to mother, but from one birth to the next — it is very often difficult. This is the only recurring characteristic in nearly every birth story I hear (and I hear a lot of them now). Different things make it difficult for different people. Not everyone experiences the same levels of pain. Not everyone would describe their body as "broken" in the aftermath.

In the words of Knightley, though, it is always a battleground. If we want to better prepare future mothers for the experience, we cannot shy away from revealing as much. We cannot fuel the narrative that birth is "easy" or "painless" or that we should be expected to look our best on the same damn day we had a baby. We cannot fuel narratives that make it so that women who do not feel this way — women who do not have the strength or desire to put on makeup, or leave the house, or look "pretty" — feel like failures.