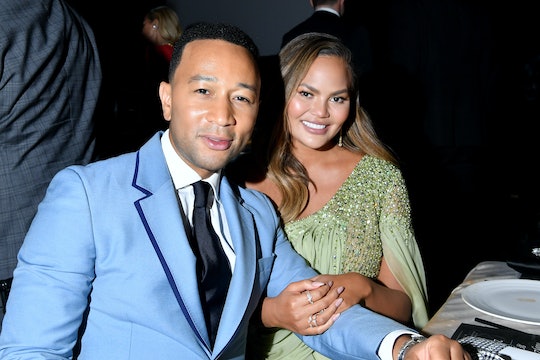 John Legend has officially been crowned People's "Sexiest Man Alive," and while his wife Chrissy Teigen and the entirety of Twitter can't stop talking about the EGOT winner's new title, his kids could truly care less. In fact, Teigen asked Luna and Miles about Legend's fancy new honor and it's clear they've got other priorities.

Teigen took to Twitter on Tuesday night to share a hilarious video of her trying to chat with her 1-year-old son Miles and 3-year-old daughter Luna about Legend's new title. "The kids...do not care," Teigen captioned the video. In it, the mom of two asks them if they're "so happy" their dad is now the "Sexiest Man Alive" and their reactions are basically what you'd expect from toddlers with other important business on their minds, regardless of their parents' fame.

So what does little Miles care about instead? It seems he'd rather explore and cause a ruckus in the kitchen, probably in search of snacks. Meanwhile, it looks like Luna just wants to chill on the couch and watch a movie already. "Can we watch the movie, mom?" Luna tells Teigen after unenthusiastically shaking her head yes to her mom's question.

Of course, people on Twitter are loving Teigen's video. "Luna is a mood!" one Twitter user commented, while another perfectly stated, "Miles losing his marbles in the background is just tying the whole thing together."

While Legend's kids could care less about People crowning their dad as the magazine's "Sexiest Man Alive" in 2019, others are really living for this moment. Like Teigen, who hilariously said on Twitter, "I have fulfilled my dream of having boned People's Sexiest Man Alive!! An honor."

She also immediately changed her Twitter bio to include "currently sleeping with People's Sexiest Man Alive" and made sure to let everyone know that "the sexiest man alive just made [her] a ham sandwich." Well played.

As for Legend, he told People he's "excited but a little scared at the same time" to hold this title, which was previously held by Idris Elba. "Everyone’s going to be picking me apart to see if I’m sexy enough to hold this title. I’m [also] following Idris Elba, which is not fair and is not nice to me!"

But leave it to Luna, Miles, and Teigen to keep him humble. Even before all of the "Sexiest Man Alive" business happened this week, Legend previously admitted that Luna is "skeptical" of the fact that he is a good singer, despite him having a EGOT status. And when Luna and Miles recently visited their dad on the set of NBC's The Voice, they were pictured looking less than impressed with his day job.

So the lesson in all of this might just be that, no matter how famous or "sexy" you get, kids really have no qualms, hilariously and adorably, keeping your ego in check.