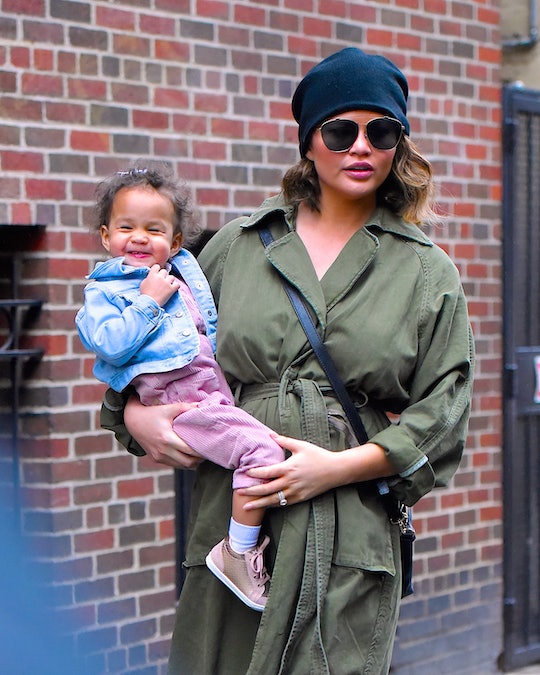 In a new interview with Marie Claire, model, cookbook author, and soon-to-be mom of three Chrissy Teigen opened up about raising Black children with her husband John Legend. While the couple's eldest child is only 4, Teigen shared that they'd already begun talking to their kids about the racism, what it means to be Black in today's America, and the privilege their fame and wealth affords them.

"There are books that I read when I became a mom that would explain to them hard and traumatic situations," Teigen told Marie Claire. "But it's really hard to teach them about their privilege; there are no books for that. But regardless of money or status, they're always going to have their skin color."

But when it comes to making sure 4-year-old Luna and 2-year-old Miles are aware of the violence, discrimination, and other realities Black people face, Teigen, who is white and Thai, said she lets Legend, who is Black, take the lead.

"When it comes to them being treated differently because of the color of their skin, I'm going to look to John for a lot of help with that because while they are Asian and white too, their skin color is Black," she told the magazine. "We just try to talk to them like little adults, saying it in words they'll understand, making it known that it's very serious, and letting them ask as many questions as they need."

While conversations about racism are undoubtedly hard, Legend has previously said he considers his family's diverse mix of cultures and heritage to be a blessing. "A lot of it has been a blessing," Legend told People of his interracial family in January. "I feel like we learn from each other. We have different experiences."

"The food has been better because we're able to merge our taste and our different upbringings and what we grew up eating," Legend told People. "We learn from each other and we love the things that are different about each other. That’s been actually fun for us."

Unfortunately, Teigen and Legend know all too well the trauma and dangers Black people often face as a result of systemic racism. During the same interview with Marie Claire, Teigen recounted how she and Legend were once threatened and harassed by two white men while visiting family in Fredericksburg, Virginia, in 2010.

"We were in a nicer neighborhood at night, driving slowly, looking for John's godmother's home," Teigen told Marie Claire. "These two guys were in a pickup truck slowly tailing us, flashing their lights, and trying to speak to us. When we pulled over, they were like, 'What are you guys looking for?' and we gave them the address."

Except the two men apparently weren't interested in lending a helping hand to a Black man. "They literally said, 'Get your asses out of here!' and proceeded to follow us all the way into her driveway," Teigen explained to the magazine, calling it "a terrible, scary experience."

While the entire encounter was upsetting to Teigen, what really dismayed her was the realization that this was not a new experience for Legend. "That was my first taste of seeing what happens to Black men everyday," Teigen told the magazine, adding that she cried for "hours" after it happened but Legend "wasn’t emotional." "Seeing that he wasn't very thrown by it was really upsetting because he obviously had experienced it before," Teigen said.

Still, Teigen, who confirmed she was pregnant with the couple's third child in August, told Marie Claire she was hopeful about the future and the representation it might bring for her children's generation. "[I hope Luna will] be afforded all the opportunities that men are afforded," she told the magazine, "and look around at a meeting and see people who look like her."