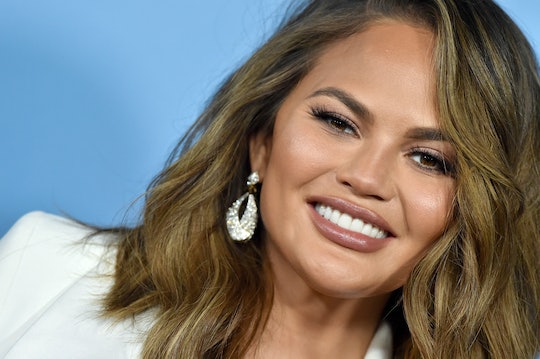 Years before she became a mom, Chrissy Teigen had gotten breast implants in an effort to feel more comfortable in a swimsuit for her modeling gigs, as she told Glamour UK in a recent interview. But, of course, things have changed since them — not only with the physical implants themselves, but also with how she feels about them now.

Before becoming the Mayor of Twitter, a cookbook author, and television host, Teigen was a model and appeared in several issues of the Sports Illustrated swimsuit edition. In those days, as Teigen admitted to Glamour UK, she was very focused on her body and revealed that she had breast augmentation surgery in her 20s to keep things "perky."

"Yeah, I did my boobs when I was about 20 years old," Teigen told the magazine. "It was more for a swimsuit thing. I thought, if I’m going to be posing, laid on my back, I want them to be perky!" After giving birth to two children, though, Teigen, who shares 3-year-old daughter Luna and 21-month-old son Miles with husband John Legend, said her body, of course, went through some changes. "... Then you have babies and they fill up with milk and deflate and now I am screwed," she said.

Doubling down on how they've changed, over on Twitter (of course) Teigen captioned a quote about her breast implants from the Glamour article: "narrator: they did not stay perky."

Whether you have implants or not, breasts change after babies, of course. As WedMD explains, the color of your areola might get a little darker during pregnancy, your breasts may welcome some new stretch marks as they get bigger, and yes they may even sag after breastfeeding.

Teigen told Glamour UK that she wants her implants "out now" and said she is concerned about the risks that come with surgery if she wanted to maintain them. "I think you’re supposed to replace [implants] every ten years," she said. "But when you have kids you think about [the risks] of surgery and I think, 'This is not the way I want to die, in boob surgery.'"

Still, with or without breast augmentation, Teigen has said that she is "coming to terms" with her changing postpartum body. "I am 20 pounds heavier than I was before Miles. he's 10 months old, I never lost the last bit because I just love food too much," Teigen wrote on Twitter in March 2019. "Just coming to terms with my new normal, when I had this certain number for so long! The thinnest I've ever been was right after Luna. Postpartum depression. I'LL TAKE THESE POUNDS AND THIS FEELING!"

To this day, Teigen continues to look at her "body in the shower and think, 'Arghhh, these kids,'" as she told Glamour UK. But then she tries to give herself a break and appreciate the fact that it birthed two kids — it's a journey of self-acceptance many moms will recognize.