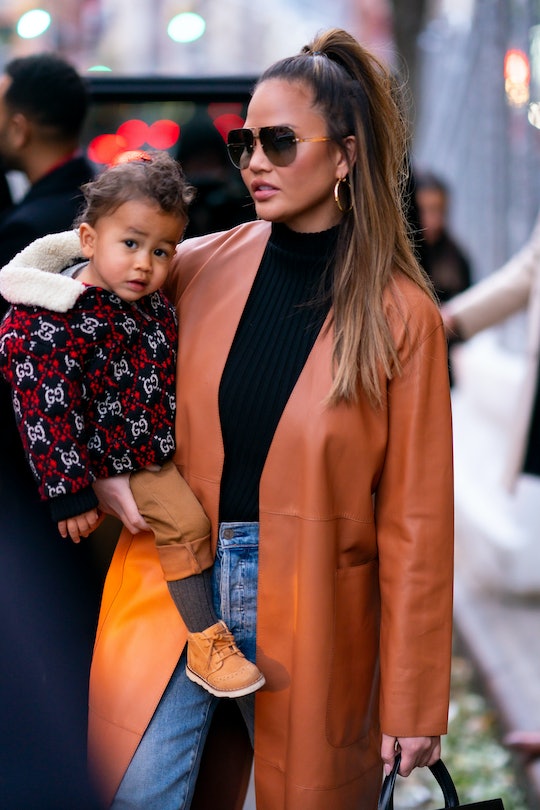 There are definitely perks to being the beloved child of Chrissy Teigen. First off, she is very funny, but let's not forget the fact that her kids have access to some high fashion items not all toddlers can get their hands on. I mean, Teigen's 1-year-old son Miles wore a Gucci tracksuit for his 20-month update, and honestly he just looked so velvety and comfortable it's difficult not to be jealous of him.

Miles and his 3-year-old sister Luna are definitely two of the luckier celebrity kids out there, in my opinion. As the children of the Cravings cookbook author and People's "Sexiest Man Alive," aka John Legend, they do enjoy a certain kind of lifestyle that would be the envy of other kids on the playground. Like amazing family holidays where they get a chance to see Santa Claus delivering their presents, for instance. Or meeting their heroes, as Luna did when she met ballet dancer Misty Copeland during a performance of The Nutcracker recently.

And their clothes, my goodness, the clothes these children get to wear. Luna tends to favor a tutu or princess dress most days, but little Miles? In Teigen's recent Instagram post, he's rocking a luxurious Gucci tracksuit like it's no big deal.

Sure, Miles' cardigan retails for around $500, but look at how happy and cozy he looks in this picture — it was clearly money well spent. Also why wouldn't he celebrate all of his big updates with some luxurious leisurewear? After all, at 20 months he apparently has 12 teeth, stands 31 inches tall, weights 22 pounds, loves his sister and cars and basketball and hates getting his nails trimmed. The world is his oyster.

Not everyone loved the fact that Teigen outfitted her son in a Gucci tracksuit, but don't worry, she managed to deal with one naysayer in short order on Twitter. When a social media user wrote, "Was it necessary for you to buy your son a Gucci tracksuit?" Teigen simply responded "yea b**ch."

It's not like Miles isn't out there earning that Gucci tracksuit anyhow. He recently worked hard as a taste tester for Teigen's Super Bowl menu, and he was painfully honest in his reviews. He had no problem telling his mother when he didn't like something she had prepared, helping her to curate an ideal menu and hold onto her title as an amazing chef. He earned that Gucci tracksuit.