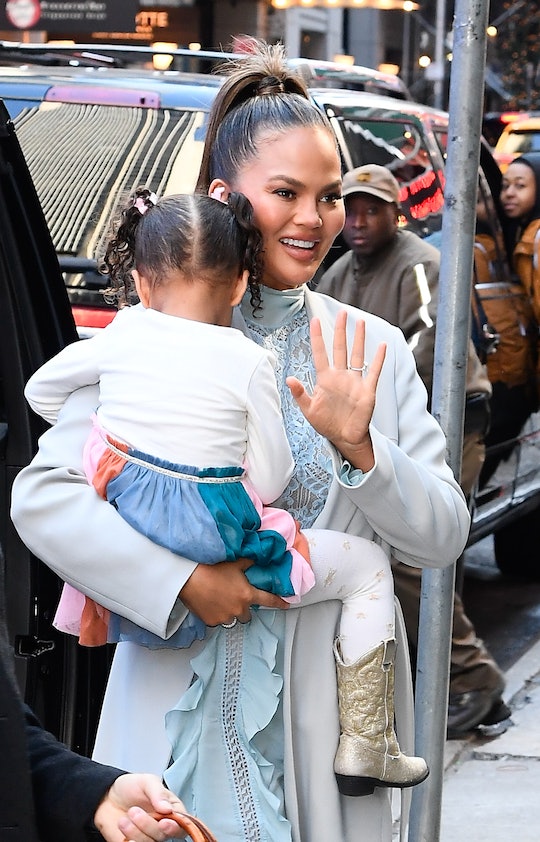 Chrissy Teigen's Daughter Luna "Hates Photos," But Can Be Persuaded For A Price

She may dislike one major aspect of her fame, but Chrissy Teigen's daughter Luna is one smart cookie. A young entrepreneur, one might even say. As her mother shared in a recent interview, 3-year-old Luna is apparently not a fan of getting her photo taken, but for a small fee, she can be persuaded to ham it up for the camera.

The Cravings cookbook author, who often shares photos of Luna and her 21-month-old brother Miles on social media, recently told People that Luna "definitely hates photos, paparazzi, anything." That's surprising to hear, considering Luna once did an actual photo shoot for Vanity Fair with the rest of her family.

So, knowing that she's very ehh about the whole photo thing, how is it that millions of Teigen's social media followers have seen so many of Luna's hilarious antics over the past few years? Well, her mother employs a useful parenting tool known as bribery. And apparently Luna's cooperation comes at a pretty manageable price in the grand scheme of things. "She does everything you see on my Instagram for a quarter or a Sour Patch Kid," Teigen told People.

Thank goodness for that otherwise we wouldn't get to see quality content, like that time Luna called her dad "John" or when she put on play with her mom about a dog wedding.

Of course, Luna isn't the only child who needs to be bribed to get their photo taken. In fact, back when Prince Harry and Meghan Markle got married in May 2018, royal photographer Alexi Lubomirski had to bribe the kids in the wedding party with candy to sit still, according to Harper's Bazaar, including future king Prince George and his sister Princess Charlotte, who were happy to sit for their close-up as long as they got Smarties (a version of M&M's that are absolutely worth it).

In Teigen's case, Luna might be a tough nut to crack when it comes to photos but they have a pretty solid mother-daughter bond that must help. As she explained to People, “Now Luna and I could not be more close. I wouldn’t be the mom I am now with Miles if Luna hadn’t given me those tougher times at the beginning. And now I know how close we are so it helps a lot."

Also Sour Patch Kids, those really do help with everything.