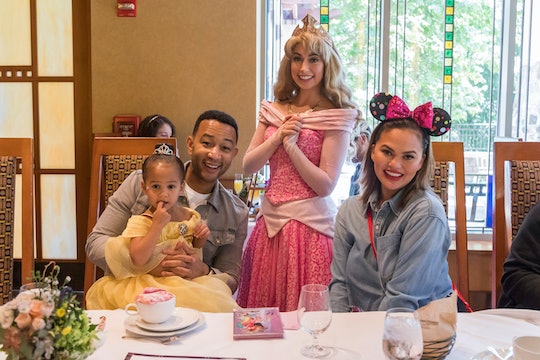 There's this weird thing that happens to kids when they turn about three, in my experience. They go from toddling to keep up to learning new words every day and trying to climb and jump and run (you know, basic skills we adults just already have and stuff) to thinking they know everything. Like literally everything. And when someone tries to correctly point out that they don't know everything they double down. Hard. And I'm sorry to admit it's really fun to be the adult following them down their rabbit-hole logic. Chrissy Teigen's daughter Luna arguing that she knows everything is every toddler ever and boy do I love her sass.

The Lip Sync Battle host shares two children with her EGOT-winning husband John Legend, 3-year-old daughter Luna and 1-year-old son Miles. While little Miles is still just a baby and developing his personality (although if Teigen's social media feed is anything to go by he already seems like a pretty chill dude), Luna is a different story altogether. A frequent star of her mom's Instagram, Luna regularly cracks millions of Teigen's followers up with her energetic personality and her sass. These days, especially her sass. Like in a recent video Teigen posted of Luna having an argument about who knows more with her grandmother, Teigen's mom Vilailuck Teigen.

So let me start by saying one of my favorite things about this video is that Vilailuck Teigen, who also goes by the name Pepper Thai and lives with the Teigen/Legend family, really digs in herself during this argument. When Luna starts to tell her she knows "everything," she says, "What do you know?" and then the little girl really has to give it some thought. She knows how to eat candy and pasta, for example, and how to swim "really good like Lisa." This one she was rubbing in because apparently her grandmother can't swim. But Luna got a bit stumped when it was noted that she can't drive. She allowed it... for a moment. And then said, "Maybe when I get a little bit older."

So clearly no adult is better than her.

Luna Legend is definitely serving some sass lately and I think I know where it's all coming from. She has to be one of the youngest people who ever got to say "Live from New York it's Saturday night" during a recent taping of Saturday Night Live when her dad was a musical guest, as per Billboard. That's going to give anyone a big ego.

And let's not forget the genetic factor. Teigen herself admits that her daughter has taken after hew own sassy nature. As she told Lady First:

She's sassy. We team up against John. He likes that she's a strong young girl.

But don't go thinking Luna is a one-dimensional person here. As with all of us, she is a complex, many-sided human, as her mother explained to the media outlet.

She's also very sweet and caring. If she sees somebody hurt, she's the first to run over.

She's also three. And do you know what 3-year-olds know?

Everything. Just ask them.

More Like This
Spread Some Christmas Cheer In Your Child’s Bedroom
20 Stocking Stuffers For Kids Under $20
Aww! 2-Year-Old Archie Is "Very Happy" To Be A Big Brother
24 Children's Books For Your Dino-Loving Kid