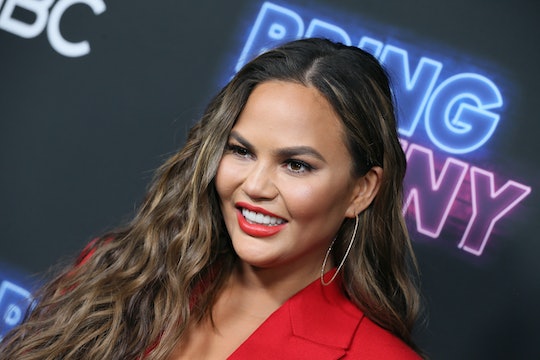 Have you ever wanted to interact with Chrissy Teigen in a real world kind of way? I mean beyond simply following her on social media, which of course already feels like a deeply personal interaction considering how much she is willing to share of herself with her adoring fans. But here's the thing; if you are hoping to actually meet Teigen and, oh I don't know, have her solve some of your petty legal disputes, you are about to hit the jackpot. Because people are sending Teigen cases for her show Chrissy's Court, and already I'm telling you this is going to be the most entertaining thing out there. Also if you are mad at someone and want Teigen to tell you that you're in the right in her own personal court, this could be a win/win.

Teigen is set to be the next Judge Judy (except without the years of law school and the actual qualifications but why quibble) in a new series called Chrissy's Court, as per Variety, which will be debuting on the new video subscription service Quibi. The Cravings: Hungry For More cookbook author will preside over a small-claims court for 10 episodes that will run for 10 minutes each, and she's already looking to her millions of social media followers to send in some of their most interesting cases.

Now if you think Teigen is going to be interested in passing judgment on some of the more serious legal battles out there, you clearly haven't been paying attention. As she noted in a recent tweet, she's looking for cases like, "Bought a bridesmaid's dress for a wedding that never happened? Have a sh**ty roommate? Significant other watched a show without you?" You know, the stuff that really affects our day to day lives but doesn't necessarily merit legal services. Best of all? Teigen's famously hilarious mother, Vilailuck "Pepper Thai" Teigen, will be her bailiff. I have no idea how this wasn't a thing before.

Already the cases are pouring in on Teigen's Twitter feed, and some of the most fascinating issues appear to be with people's children. Toddlers who tend to be notoriously difficult to litigate against. As one social media user wrote:

3-year-old constantly commenting on the "stripes" on my stomach, which are stretch marks from carrying her 9.5 pound self around for 9 months. Can we sue our children?

Teigen is apparently totally down for suing babies, so you're all good.

In a statement about her upcoming series, the Bring The Funny host made it clear that she is a longtime fan of small claims cases as well as the people who try them, "When Cellino & Barnes broke up, I was devastated. I knew I had to take matters into my own hands. Here’s one jury duty you won’t want to miss.”

I think we can all agree that Chrissy's Court is going to tick all of the boxes. Teigen herself, petty disputes, her mother as the court bailiff, and the possibility that we could see some of those smug toddlers defending their behavior in court. Quibi is set to launch in April 2020, so stay tuned.

It's programming we deserve.