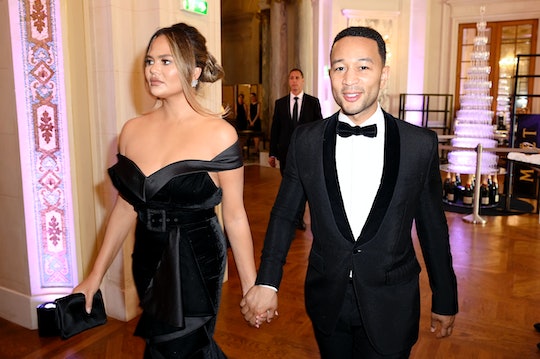 Chrissy Teigen is trying to live her very best life right now. She's the mother of two of the cutest kids you'll ever see, 1-year-old son Miles and 3-year-old daughter Luna. She's married to John Legend and actually appears to have a great old time with him all the time. Plus she's one of the only people who manages to treat social media like a silly playground with her shenanigans. Even when the internet is not exactly a playground, Teigen shows up to play. But that doesn't mean it's easy. Teigen's response to a pregnancy question from a troll is an important reminder that words can cut deep, no matter how famous you might be.

The Lip Sync Battle host and her family are spending a little well-deserved down time in Europe at the moment, in a sort of fashion. Teigen is not exactly one to let a fun idea drop if one happens to cross her mind. So when the former model decided she wanted to recreate the iconic reality series Four Weddings from TLC (where four brides invite each other to their weddings and compete to see who had the best one for a free honeymoon it was honestly the best), she went for it. She and husband Legend spent a day filming their own version of Four Weddings for her Instagram Story, and in one of those versions she was "married" in a towel.

And here's where the fun stopped.

While most of Teigen's followers were just happy she had shared such a hilarious experience, one insensitive troll wrote on Teigen's wall:

I mean, really? Is this still a question we're asking people? Is there ever, ever a need to insert yourself into someone's private life on that level? The Cravings: Hungry For More cookbook author already shares so much of her life with her followers so generously... why this?

Teigen's response cut like a knife in more ways than one.

I know you didn't mean it to be rude but think twice about asking this, there are people who have trouble conceiving and it hurts every time. I'm not pregnant but would be happy if I were. But I'm also happy not to be!

Teigen and Legend have been open about their struggles to conceive in the past; both of their children were conceived through IVF after several devastating failed attempts, as per Harper's Bazaar. The last thing any woman needs is to be asked if she's pregnant, whether because she's struggling with fertility issues or self-conscious about her body. As Teigen went on to note in a response to the original poster (who quickly changed their Instagram handle):

I'm already reminded of it every time I get out of the shower, I don't need to hear it on the daily lol.

This is just not a thing that needs to happen ever, ever.

Let's all move forward to a peaceful place of zip your lip if you can't say something nice. Especially if you want to ask a woman if she has a baby bump.

God do I ever look forward to this place.