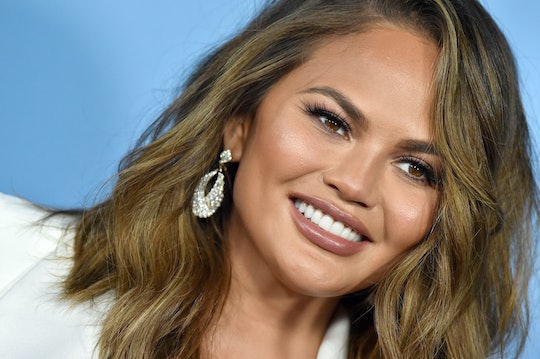 If you have a bunch of bananas in your house and have been wondering what to do with them, Chrissy Teigen's "semi-healthy" pregnancy craving with her third baby sounds like the most delicious thing to do. Especially if you're tired of just throwing your bananas into smoothies or eating them the regular way.

The Cravings: Hungry For More cookbook author recently announced that she and husband John Legend are expecting their third baby to join 4-year-old daughter Luna and 2-year-old son Miles. Legend explained in an interview with TODAY that their little one came as something of a surprise to the couple, "It was a surprise. A little quarantine surprise, I guess you could say," he told the news outlet.

Teigen actually found out she was pregnant after taking a test she expected to be negative, something she acknowledged on Twitter she has been doing for years. Both Miles and Luna were conceived via IVF. This time around it was positive, of course, and her third baby is now on the way, which means the food cravings have begun.

And for a classic foodie like Chrissy Teigen, you know whatever she is eating during her pregnancy is going to be delicious. Even something as seemingly healthy as banana chips.

Teigen explained in an Instagram post (complete with recipe) that "banana chips are the only semi-healthy thing I can consume right now." "Well no they aren’t BAD for you by any means," she added, "especially compared to what I WANT to eat. But man I can destroyyyyy handfulls of these in mere minutes. I love them with just flaky sea salt."

Banana chips do seem like a pretty healthy pregnancy craving, especially compared to some of Teigen's most-loved food choices during her pregnancy with Miles. Back then, she favored meals like her dad's corned beef and cabbage, cinnamon rolls, and visits to taco trucks, according to Us Weekly, although even then banana chips were one of her favorite snacks. As she tweeted in March 2018, "I am a huge banana chip fan."

Like any resourceful mom, Teigen went ahead and came up with her own recipe for banana chips and, lucky for us, didn't keep it a secret.