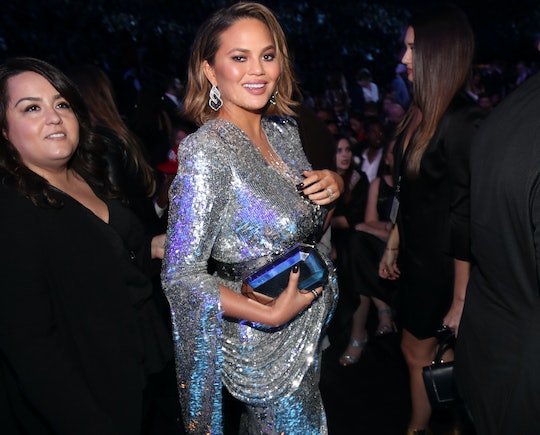 Chrissy Teigen's Outlook On Luna & Social Media Is So Relatable

Being a parent in the age of social media is often a bit challenging to navigate. Most of us just try to adopt an approach that seems reasonable, though that could pretty much mean anything from "I never share my kids' faces" to "my child is an Instagram influencer with 2 million followers." But although there isn't always a ton of overlap between the lives of celebrity moms and us non-famous types, social media is probably one area in which they can probably teach the rest of us a thing or two. In an interview with People Wednesday, Chrissy Teigen discussed sharing about Luna on social media, and though the star says she tries to keep things pretty simple, it sounds like she's given a fair bit of thought to her nearly 2-year-old daughter's social media presence.

Teigen, who is currently pregnant with her second child, opened up about motherhood and what it's like to raise children when you also happen to be known for being open about your personal life with your fans. She told People that, while her approach to social media in general is actually pretty casual, that doesn't exactly mean she is just as honest and uncensored about her life as a mom as she is about everything else.

For one, the Lip Sync Battle star said she is definitely mindful about the delicate line between being open about her life, and totally oversharing. Yet, when you're a celebrity mom, there's also no denying that being completely closed off can backfire, too. Teigen explained,

The more you hide, the more people are curious and then it becomes a really frustrating thing. So you don’t want to be too secretive. But if you show a ton then you open yourself up to a world of criticism for showing too much. It’s hard because you want to keep their special moments really special.

Parenting criticism is something Teigen definitely knows about first-hand of course — she's been on the receiving end of some brutal mom-shaming ever since Luna was a newborn. There was the time, for example, when Twitter let her have it when she was photographed out to dinner a few weeks after giving birth, according to E! News (how dare she do such a thing). She's also been told, according to TIME, that she was holding her baby wrong, that she brought her down the slide incorrectly at the playground, and that she was a terrible mother for letting her daughter go without socks on her feet

And let's not even get into the backlash she faced when she revealed that she and husband John Legend specifically chose to have a female embryo implanted during their IVF cycle when they got pregnant with Luna:

In other words? Twitter can be cruel when you're sharing glimpses of your life as a mom with millions of followers. But despite the online trolls, Teigen says she still likes to share cute moments with the world, and that she tries not to overthink it. She explained, “There’s not too much thought that goes into anything I post. I’m not like, ‘Okay, I’m going to post this at 2:00. I’m going to touch up her face.’”

One thing she does take into account though, is how Luna herself might feel one day about the things her mother is posting. Teigen said,

It’s not like I want to post her meltdowns or anything that’s going to embarrass her or get us in trouble — something like if she’s sitting by an outlet or [in] a car seat and the strap isn’t high enough. That stuff is exhausting to deal with.

In all honesty, everything Teigen experiences online in regards to sharing about motherhood seems completely exhausting to me, but for the most part, she seems to handle it well (it definitely helps, I'd imagine, that she is the hands-down queen of the clapback). But her viewpoint is also one that sounds a lot like one many mothers share — while we may not have to endure millions of nasty comments about every little thing we do, there is the issue of how much sharing is too much sharing, and whether it's OK to share certain things when your kid is too young to consent.

As with pretty much everything in the parenting realm though, there isn't only one right way too approach it, and even among celebs, many parents choose to avoid social media entirely just in case. In truth, the fact that social media even exists the way it does now means that there isn't much precedent when it comes to posting about our kids, and that means that we just kind of have to feel it out as we go.

One thing that does seem pretty clear though is that Teigen's strategy is a pretty balanced approach, and that it might be one that works well for a lot of parents. But just like all of us, she'll likely still learn more as she goes along, make adjustments as needed, and probably cross her fingers that she's doing the right thing, like every other parent does regardless of the issue.