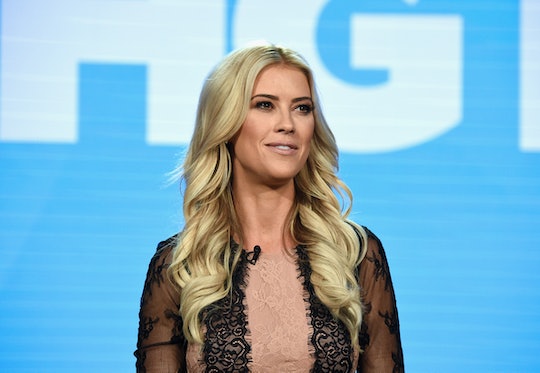 I think it's probably the happiest people in the world who face a blip head on and just keep on moving. They don't let a disturbance in their plans ruin their joy no matter what. Take Christina Anstead, formerly Christina El Moussa, for instance. The newly pregnant mom of two is happily remarried to husband Ant Anstead, and she's not letting anything get in the way of that. Christina Anstead confirmed the sex of her baby after her ex-husband Tarek El Moussa already spilled the beans, but did she let it take away from her joy? When you see the pictures, you'll see... she is simply too happy to let such a small irritation get in her way.

Fans of HGTV's Flip or Flop are already well versed in the ups and downs of former married couple (and continued hosts of the reno show) Christina and Tarek El Moussa's relationship. The parents of two, 8-year-old daughter Taylor and 3-year-old son Braydon, separated privately in May 2016 and were divorced by January 2018, as per Country Living. Christina got remarried to British television presenter and proud father of two (15-year-old daughter Amelia and 12-year-old son Archie) Ant Anstead in December 2018. In March, Christina announced via Instagram that the blended family of six was going to be adding one more to their numbers.

It is clearly an exciting time for the whole family, with Christina noting in her pregnancy announcement that the "kids are all so excited to meet their sibling." This couple is all about their new blended family, in fact; a scroll through either one of their Instagram feeds shows happy kids spending time with each other and their parents. Which is perhaps why no one seemed overly upset when Tarek accidentally revealed the sex of their new baby during an interview with TMZ Live on April 8, saying:

Things are good today. She’s remarried, she’s actually pregnant — everybody knows that. She’s having a son. My kids are super excited. I’m excited for her new chapter in life. They’re a great couple and I really do hope the best for them.

Pregnant celebrities are pretty big fans of revealing the sex of their babies on social media with colored balloons or cakes or whatever is on trend in the moment, so I doubt anyone would have blamed Christina for being frustrated that her ex-husband told the world she was having a son before she got the chance. Christina's publicist confirmed the sex of the baby in a statement to People, saying:

While Christina and Ant wished they could have shared the news themselves, they are very excited to welcome a baby boy in the fall.

Nope. Both Christina and Ant shared a happy photo of the whole family releasing balloons in the sunshine.

It’s a boy 💙!! @ant_anstead, the kids and I are so excited! This blended family cannot wait to add our 5th child to the mix 🙌🏼!

I think this family knows that at the end of the day, the big gender reveal doesn't mean as much as the actual human they are about to welcome into their family. What matters is that they love each other, their kids love each other, and they even love each other's kids.

And that's enough of a reveal on its own.