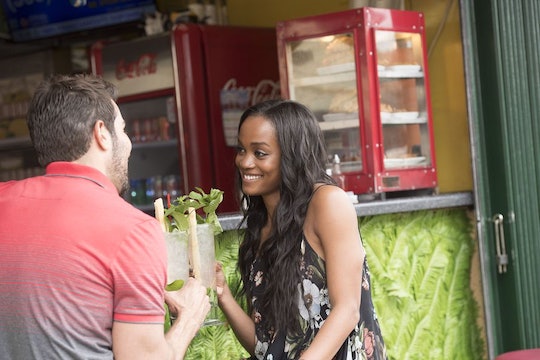 Clues Rachel & Bryan Are Engaged After 'The Bachelorette'

If someone told you at the beginning of the season that Bryan and Rachel would end up together, you’d probably believe them because, well, that chemistry is legit. So now that there are all of these clues that Rachel and Bryan are engaged on The Bachelorette, it’s time to face the very real possibility that Bryan gets that final rose. He did, after all, get the very first rose of the season, so it would all come full circle for him.

Obviously, Rachel can’t reveal who her fiancé is at the moment since the show hasn’t finished airing on TV, but she’s spoken about him (whoever he is) on more than one occasion including recently, to tell E! News that they’ve definitely gotten closer since filming, adding that: "We talk every day, we text, we FaceTime. We have secret meetings where we see each other, but it's never enough!"

So could this mystery fiancé be none other than Bryan, the recipient of the first impression rose and her first kiss of the season? There are already several clues that say Bryan and Rachel are engaged after The Bachelorette and still going strong to this day as a Bachelor Nation power couple. Don't believe me? Just check out the clues for yourself below:

Now, I know I don’t have to remind everyone about that designer watch Rachel bought for Bryan when they traveled to Sweden. On his Instagram account, there are several photos of Bryan still wearing the expensive timepiece, and I refuse to believe that it’s because he enjoys the finer things in life. Rachel has also been seen on social media wearing her matching watch as well. At least, I choose to believe that’s what it is in the image, though it's hard to tell.

Their Love For Their Dogs

Not only do Rachel and Bryan both have dogs, but they both use Instagram to show that love, much like all parents do. But there was also that time when Rachel posted the photo above with her dog on what looks the same exact couch that Bryan posed with his own dog on. Coincidence? I think not.

They’re At Similar Points In Their Lives

When Rachel appeared on the Women Tell All special from last season’s Bachelor, she revealed that she’s looking to settle down and start a family in the next few years. And Bryan apparently wants the same, as he said in his Bachelorette bio that he already plans to have two to three kids. Let’s see what Rachel has to say about that first, though.

Weeks ago, Rachel admitted that she’s engaged when she spoke to The Hollywood Reporter and said of her new fiancé: "If I had a list he would check everything off." And in a recent one-on-one date with Bryan on The Bachelorette, Rachel said, "He has a lot of the characteristics I’m looking for in a husband." So maybe these characteristics are part of an invisible list that she would have been checking off, if she could?

At this point in the game, it’s difficult to ignore the blatant clues that Rachel and Bryan are engaged on The Bachelorette. But to be honest, I am totally OK with shipping the two of them. So maybe true love on reality TV really does exist.