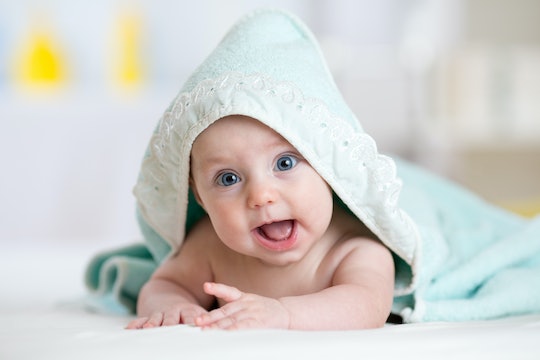 Co-Bathing With My Son Was Honestly NBD

When my kid was born, we got one of those little plastic infant baths that you sit the baby in to bathe them. As far as I can recall, we used it a handful of times when he was really small. But to be honest, it was always awkward and a pain. Washing around his head and neck was almost impossible, and with a drool-y newborn and a formidable milk supply, those were often the most urgent parts to clean up. We tried washing him in the sink, and even got one of those little bath chairs, but mostly I just took baths with my baby, and it worked out great. I guess that's controversial to some people, but honestly, in our family it has been approximately the smallest deal in the entire world.

I never really even thought twice about co-bathing with my baby. I understand that it isn't the most standard practice in our culture, and that therefore it might seem weird to some people. It seems like people get hung up on the topic of nudity a lot, and many people have very strong opinions about what age is best to stop showing or bathing with your kid. On the other side of the fence, in reading up on co-bathing for this article, I learned that it's often promoted in attachment-parenting circles.

I don't really consider myself a full-blown attachment parent, nor do I follow any other super specific parenting tenants. Much like what I assume the vast majority of parents are actually doing, my wife and I have a "try stuff, see what works" strategy. So one day, once my c-section incision was finally all healed up and I had the go-ahead from my doctor to take a bath at all, we decided to try co-bathing. To be totally honest, we didn't even know there was a term for it.

The first time we did it, I was really nervous. At that point in his life, our baby was not a huge fan of baths of any kind, and bathing him was always a huge ordeal. We were hoping doing it this way would simplify things a little, but I had all kinds of concerns. The bathtub was so much bigger than his little plastic tub contraption, or our bathroom sink, and what if he slipped or I dropped him? What if he wiggled too much and managed to bump his head on the ceramic side of the tub? What if, because I was topless, he spent the entire time trying to get to my boobs to breastfeed? I tested the water two or three times to make sure it was the perfect temperature for a tiny baby, and then I climbed in, and my wife carefully handed him in to me.

I needn't have been so stressed. It went absolutely fine.

It went so fine, in fact, that it's not really even memorable. I can recall being nervous beforehand, but the bath itself just blurs together with the hundreds of other times I've bathed my child. There was water, there was extremely gentle baby soap, and he got clean. I'm sure I was relieved, and despite my fuzziness on the specifics, it must have gone well because we decided to give it a go again, and again, and again.

When he was on my lap in the tub, I always knew he was safe because he was right there with me. I knew I could grab him quickly if something happened, and I knew that he felt secure and comfortable.

Sometimes I'd be the one in the tub with the little one, and other times it would be my wife. She has some back problems, so once he reached a certain weight, holding him in the tub while washing him really became too much for my wife. After that, it was just the me-and-baby show. We did get a hand-me-down bath chair for him at one point, and once he could sit well enough we started putting him in at bath times. I thought it was the start of a new era, but after a few short weeks, he was back on my lap.

First of all, it turned out that leaning over the tub to wash him was way more of a hassle than washing a baby seated in my lap. And second of all, before we knew what had happened, he had figured out how to climb out of the thing on his own anyways. At the time we were living in an apartment that happened to have one of the slipperiest bathtubs known to humankind, and if he was in the tub on his own, he was definitely going to try to stand up.

When he was on my lap in the tub, I always knew he was safe because he was right there with me. I knew I could grab him quickly if something happened, and I knew that he felt secure and comfortable. If he did something stupid, like diving face first into the water, or trying to lick the faucet, rather than having to reach in the tub quickly to retrieve him, I just put my arm around his middle and pulled him into a better position. That might not seem like a big deal, but any parent knows that with a baby or toddler, cutting down your reaction to crisis time, even a tiny bit, can make a huge difference. When he was really small, it made it easier to move him around to wash him. As he grew, it made it easier to keep him contained. To put it simply, it just worked.

We both have bodies, and sure, our bodies are different, but that's nothing to be ashamed or embarrassed about.

As to the issue of nudity, it really hasn't been much of an issue at all. In the beginning, he'd occasionally ask to breastfeed in the tub, but I've maintained a strict "we only nurse on dry land" rule, mostly to minimize bath-time gymnastics. Maybe I'll feel differently when he gets older, but I've never been uncomfortable with nudity myself, and I really don't see it as that big of a deal. We both have bodies, and sure, our bodies are different, but that's nothing to be ashamed or embarrassed about.

Co-bathing hasn't been some magical snuggly bonding experience for me and my kid. It wasn't something that I started doing because of my hippie ideals or anything. It was just a practical solution to a pretty run-of-the-mill problem, which was the fact that we had to get our baby clean and this was the way that worked out best for us to do it. He sits on my lap and plays with toys while I wash him, and then his other mom takes him for drying and tooth brushing. He likes that he can lean on me if he wants to, and I like that I don't have to kneel on the tile floor outside the tub.

When it comes to bath time, I'm all about doing whatever works. Co-bathing has worked really well for us, and we'll probably keep doing it as long as it does.