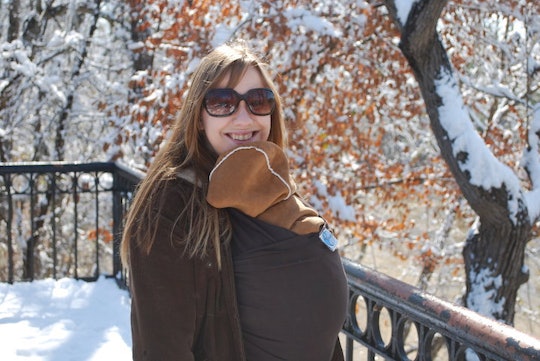 I'm A Hippie Mom & I Don't Care What You Think

Last night, I woke up in our queen bed, which is side-carred next to a twin and had to move over because my 6-year-old son had just gotten into bed with us. Not soon after came his brother, who's 4 years old. Then baby woke up next to me and started talking, so I had to breastfeed him back to sleep, and get up to pee in the middle of all of it. But when my husband and I woke at 6:30 a.m., all three were curled up, happy, warm and content in our bed. Some people would scoff at the idea of kids their age bed-sleeping. Some would scoff at the idea of bed-sharing and co-sleeping, period. But I’m a hippie mom, and I don’t care what you think.

I am unrepentant. I believe people need to normalize toddler breastfeeding, so I breastfed my middle son in public until he was 3-and-half years old. We’d be at the gymnastics place, and all the kids running around would get him overwhelmed and unhappy (he’s easily overwhelmed), but a stint breastfeeding in my lap saved him from biting someone or breaking down. I breastfeed my 2-and-half year old whenever he asks for it, and if that’s in a restaurant, and I’m wearing a shirt I can breastfeed in with a modicum of modesty, I do it. That’s because he wants to breastfeed, and his need to breastfeed comes before whatever kind of public squeamishness I may encounter. I’m a hippie mom, and I just don’t care. Look the other way if you don’t want to see it.

It’s not only the breastfeeding in public and the co-sleeping. Hippie momming comes in the little things too. My two youngest still wear their Amber Teething Necklaces, even though they’re done teething, both because they’re cute and because they’re a sign to other mothers. When I see a baby, toddler, or preschooler in Amber, I take that as a measure that they subscribe to the certain hippie/attachment parenting worldview that I do. Amber, I feel like, is our sign and our signal.

My other public, constant, visual sign of hippiedom is the same one I looked for when I was a brand-new mom trying to find like-minded moms: I babywear. Well, I toddler-wear at this point, and my kids don’t always want to go up. But babywearing, to me, is about keeping my kids close and cuddled against me, so that when they’re too big to wear, they’re independent enough to sprint away. My older two are now the sprinters. My youngest lately likes ring slings, so I toted him a few hundred yards to the splash pad yesterday in a blue Soul ring sling. When you have a 2 year old in a carrier, people turn to look. Isn’t he big enough to walk? Isn’t his head in the way of your head? Yes... to both. But I like wearing him, because I’m a hippie attachment parent. And he likes being worn.

He also likes wearing cloth diapers. He's actually also told us that he prefers cloth. I certainly do. It’s easier on the environment, easier on his skin. I don’t mind the washing routine. We use cloth when we’re out; we use cloth on vacations. I just bought more cloth because the pre-folds we’ve used for six years and three kids are beginning to self-destruct. Yes, I secretly think they're superior to disposables, and that people use throw-away kind because they’re scared of getting poop in their washing machine. We have a sanitary setting on our washer, and when we’re at my dear mother-in-law’s or my mom’s, we wash on the hottest setting the washer has. No big deal. You can use cloth 600 miles from home. We do. That’s because I won’t use disposables under any circumstances. They give my kids rashes. And honestly, I just don't like them.

I believe in bodily autonomy. It’s my kid’s penis, and he has the right to decide if he wants part of it cut off. He can make that decision at a later date.

Speaking of down there, there’s one way to tell we’re hippies that you’ll never see unless the kids are running around naked, which is admittedly more often than other children. We didn’t circumcise our three sons. We believe circumcising cuts off too much skin, that it impedes future sexual function, and that it’s an unnecessarily painful procedure to inflict on a newborn. And yes, I am aware that the Mayo Clinic notes circumcision decreases the risk of urinary tract infections, STIs, and penile issues and cancer. But mostly, I believe in bodily autonomy. It’s my kid’s penis, and he has the right to decide if he wants part of it cut off. He can make that decision at a later date. I’ve deferred it to him. And yes, I think all children deserve that right.

I’m a hippie mom. I’m unashamed. We breastfeed and babywear all over the place. My kids wear Amber Teething Necklaces. Sometimes, I wear a matching one. My baby always wears cloth diapers and under no circumstances would I allow them to be circumcised. It’s not mainstream parenting. We’ve done things far differently than most other American families. But all that attachment parenting has grown some independent little boys. We’re happy. We’re healthy. And if you have a problem with that, I’ll try to educate you. If that doesn’t work, I’ll resist the urge to stick my fingers in my ears and sing. We like things the way they are. And we don’t care what you think.