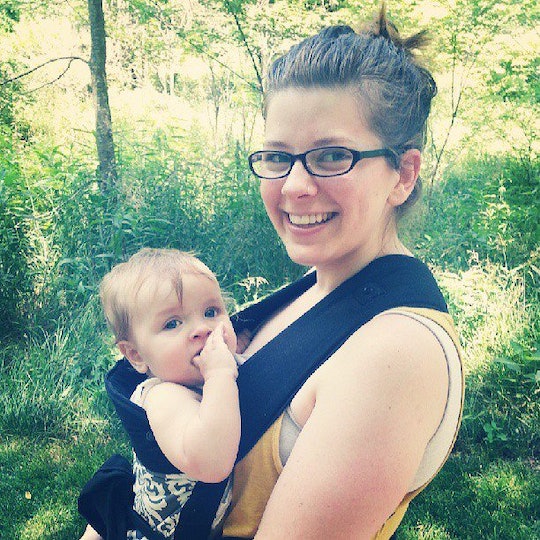 When my first daughter was born, I had no idea that different styles of parenting even existed. I was clueless about attachment parenting, free-range parenting, and helicopter parenting. I kind of assumed other parents just did whatever worked for them and their family or mimicked the habits their own parents had used during their childhoods. But it wasn’t long before the internet taught me otherwise. I was quickly introduced to a wide variety of parenting styles, along with their pros, cons, and virtues when I fell down the rabbit hole of online parenting message boards and Facebook groups.

Thanks to the overwhelming amount of information I found online, I quickly adopted a label for the parenting style I thought was the best fit for me and my family: attachment parenting. We didn’t sleep train, we were co-sleeping out of necessity, and I constantly held my daughter close to me. (Let’s face it, she wouldn’t have allowed otherwise.) So, a few weeks into my daughter’s life, I officially became an attachment parent and I have been failing at it miserably ever since.

You see, before I joined the ranks of attachment parenting, I knew I was struggling to adapt to new motherhood, but I didn't really have a way to measure just how miserably I was falling short. Breastfeeding was hard — so hard. I wasn’t getting any sleep. My husband and I were silently living together as roommates at best and more often, our relationship was full of tension caused by the difficulties of new parenthood.

Courtesy of the attachment parents I'd met online, I now had a simple system for measuring my successes, but also my failures. This system made my failings overwhelmingly clear.

But when I adopted the label of attachment parent, I was thrilled to have what I saw as a checklist for doing things right. I no longer felt aimless in my role as a mother because I had goals. Breastfeed on demand. (Which meant I could ditch the exhausting schedules provided by friends.) Cuddle, bond, and connect. (Which meant I no longer had to feel guilty for falling asleep with our daughter in our bed or letting her breastfeed to sleep each night.) Courtesy of the attachment parents I'd met online, I now had a simple system for measuring my successes, but also my failures. This system made my failings overwhelmingly clear.

This worked for awhile. It allowed me to shove all of the uncertainty of new motherhood out my mind and focus on the tasks at hand. But eventually I couldn’t keep up with the demands of this style of parenting. Breastfeeding was a never-ending battle and the negative emotion known as D-MER associated with my struggle was only fueled by my strict prescription that breastfeeding on demand was the only acceptable way to parent. Like many women with kids, I was growing weary of being touched all of the time. I'd wake up at night with my daughter latched to my breast and feel like I was crawling out of my skin. I needed space to sleep and room to breathe, at least in my own bed.

These tasks seem simple enough, but for me they resulted in a crazy amount of burnout. At times, I found myself resentful of my daughter’s demands and the fact that they limited my ability to meet my own needs.

Needing to feel like my own person, to put space between my daughter and I, made me feel like the worst attachment parent ever. It felt impossible to meet her needs for emotional connection and my own needs for solitude at the same time. No longer did I believe that attachment parenting was perfect for me.

And honestly? Attachment parenting is hard. Attachment parents are encouraged to respond quickly to their child’s cries, to allow their child to determine their feeding schedule, and to create space in their own rooms and beds for the baby to sleep, instead of in a separate nursery. These tasks seem simple enough, but for me they resulted in a crazy amount of burnout. At times, I found myself resentful of my daughter’s demands and the fact that they limited my ability to meet my own needs.

Attachment parenting is hard, but it shouldn’t be unrealistically demanding or unhealthy for the baby’s caretakers. In relying on the women of the internet who also had kids to provide me with the information I needed to adopt an attachment parenting lifestyle, I'd missed out on the real deal. (And for the record, that was not their fault.) Dr. Sears, the face behind the attachment-parenting movement, knew how possible burnout was for all parents, especially those who follow attachment-parenting principles. Because of this, I realized that his teachings don't simply urge parents to meet their baby’s needs through breastfeeding, bonding, and bed sharing — he also preaches balance.

I was only failing at attachment parenting because I didn’t have the full picture.

“In your zeal to give so much to your baby, it’s easy to neglect the needs of yourself and your marriage,” he explains on his website. “As you will learn the key to putting balance in your parenting is being appropriately responsive to your baby – knowing when to say ‘yes’ and when to say ‘no,’ and having the wisdom to say ‘yes’ to yourself when you need help.”

This was the vital information I'd needed all along. I was only failing at attachment parenting because I didn’t have the full picture. Knowing balance was not only possible, but encouraged by the founder himself, allowed me to step back and reexamine how I was approaching my daily life at home with my baby.

Since then, I've been able to do better at finding the balance that's so essential to my survival as a mother. This has been paramount to my own self-care and my ability to care my family as we've grown. Attachment parenting is still hard and I still fail to approach how I parent with graciousness and patience daily, but I've fallen in love the modified attachment parenting approach we've found. The one that allows me to lay in bed with my daughters at night, reading them books before bed, but also gives me the permission to escape one night a week and let dad take over.

Attachment parenting is hard, but I'm honestly not sure I'd have it any other way.