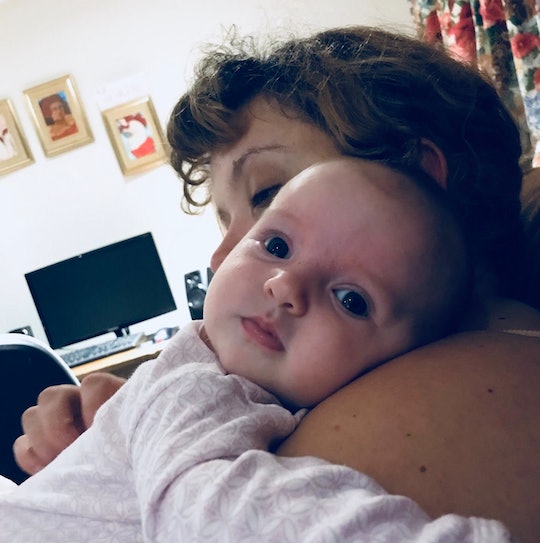 Colic Will Make You Feel Like A Failure — Head's Up

In the week or two after my second baby was born, I couldn't believe how well everything was going. Unlike my first, Elia latched onto my breast minutes after entering the world. She was an amazing feeder all around: there was no struggling, no fussing, and she consumed enough milk to drain both of my boobs regularly, thus keeping me free of discomfort. Sometime shortly after the 14-day mark, however, everything changed. She developed colic — and while I had always assumed that this must be an immensely difficult thing for new parents to go through, I didn't anticipate that colic would make me feel like a failure as a mother.

According to Pampers, "Colic can be defined as bouts of intense, loud, and inconsolable crying, for no apparent reason, for three hours or more a day, three or more days a week, for three or more weeks in a row." Typically starting between the second and fourth weeks of life, approximately one-fifth of infants experience the mysterious, endless bawling — and it really is a mystery. As Dr. Elizabeth Marks, a pediatrician and internist in Albany, New York, told Romper, colic is a "diagnosis of exclusion."

I was always taught that babies cry for three predominant reasons: they're tired, they've soiled themselves, or they're hungry. Colic doesn't neatly fit into that picture, though. Colic is when you've changed the diaper, you've nursed or bottle fed as much as your child will take, you've tried settling them into a nap, you've examined their body for potential injuries, and yet they will not stop crying. They will cry when you try to lie them down, sit them up, rest them on your shoulder, or rock them gently. They will cry as your doctor or midwife assures you that nothing is medically wrong with them. They will cry until you're crying, too — berating yourself for not being able to do better.

There is an immense amount of pressure put on parents (and arguably on mothers, in particular) when it comes to caring for their offspring. The pressure manifests in all forms. We are told how much or how little to feed our kids. We're chastised for buying them too many clothes, or not enough. We're called "selfish" when we make time for ourselves outside of parenting, but we're pitied if we dedicate "too much" of our lives to our babies. We're either encouraged to lose the baby weight, or to instantaneously fall in love with our new figures. We're damned if we become stay-at-home moms. We're damned if we go back to work. We're pretty much always damned, actually.

Since having my first daughter nearly two years ago, I've always been struck by how frequently people will express the importance of raising a happy child (almost as if my goal was to raise a miserable one). With my eldest, Luna, I've been bombarded with advice on when to take her to toddler groups, when to dedicate one-on-one time to her, when to allow her to watch TV, what games to play with her, and more — all from folks who think they've nailed the recipe for happiness.

I should not have been surprised, really, that the incessant pressure to raise happy kids would have a profound psychological impact on me. And that, when my youngest would prove to so very rarely be content, I'd turn the blame on myself.

After her second week with us, Elia started crying inconsolably. She'd usually kick off immediately after breastfeeding, which made me wonder whether the problem was with my milk. Did I have an undersupply? Did I have an oversupply, subsequently making her take too much in at once? Should I switch to formula? Was something in my diet the culprit of her upset? Was it my allotted cup of coffee per day? Would I have to give up coffee?!

The crying would usually last for several hours at a time, until she eventually settled into a very broken sleep or was ready for another feed, at which point she'd simply start back up again. I did try eliminating coffee. I also tried switching to formula. Though it seemed to ease the colic for a day or two, it wasn't long before she was distraught once more.

I picked apart my every decision. I questioned everything I ate. I wondered whether I was missing some kind of elusive maternal instinct that allows one to stop their baby from crying regardless of the situation.

All the while, I couldn't help but chastise myself. I knew, with every ounce of logic in my being, that this wasn't my fault. That I was doing all I could do sooth and care for my baby. That she was well looked after, and immensely loved, despite her grief. That my first daughter had never experienced this, so it mustn't be an inherent flaw of mine that was creating the problem. That plenty of babies get colic. That babies cry, and that's OK. That colic isn't forever.

Still, I picked apart my every decision. I questioned everything I ate. I wondered whether I was missing some kind of elusive maternal instinct that allows one to stop their baby from crying regardless of the situation. I wept to my partner, confessing that I felt like a failure as he tried to reassure me that I had done nothing wrong.

The thing about colic is that it's relentless. At soon as you think you've nailed a way to comfort your little one, they prove you wrong. For a week or so, Elia was somewhat settled when lying on my chest in an upright position — but then that stopped helping. For a few days, putting her in one of those spinning, vibrating chairs with music on seemed to do the trick. Until she seemingly got tired of that, too. For a while, she was even somewhat OK at night. She'd spend the vast majority of the day wailing until 9 p.m., when she'd sometimes sleep for three or four hours at once. It was only a matter of time before colic struck in the middle of the night as well, though.

After a month of this, I visited our local midwives again. Maybe they saw something in my frazzled, sleep-deprived, wholly on-edge disposition, but they finally recommended some over-the-counter colic relief drops to try. Though they called it a "last resort" and noted that, clinically, there was no concrete reason to give my child medicine (because colic is not a definable illness), they explained that Infacol was a gentle formula that might relieve any potential wind trapped inside Elia's tummy.

The internet (and probably every health professional and fellow parent you know IRL) is full of tips on how best to help a colicky baby. Some are natural (get coconut oil and massage their bellies!) while others are a little more clinical (like the colic drops I ultimately tried). Because colic isn't a specific illness, though, and it affects every child differently, it stands to reason that there will never be one magical trick to suit all families.

For me, however, the drops helped a lot. Although Elia hated the flavor at first, she quickly adjusted to being given the medicine before every feed. My midwife warned that it might take up to two weeks for the Infacol to enter the baby's system enough to make a noticeable impact, but sure enough, I noticed a difference after 10 days. The drops were not a "cure," and Elia is still a much fussier baby than her older sister was, but they have brought us all some relief. She may still have one or two long crying sessions per day, but they will not last all day.

With the clarity that has come from getting a little more sleep, and going several hours without a piercing infant scream ringing through my ears, I of course understand that none of this was ever my fault; that I was never really failing. Rather than directing any anger or frustration at myself, I can resume directing such emotions at the cultural values that teach mothers they are responsible for everything their children do and feel and think and experience. We are their caretakers, yes. But we are not omnipotent — and we should not be expected to be.