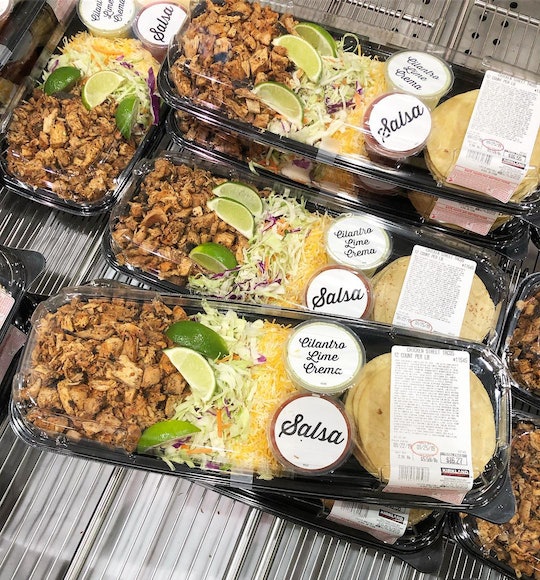 Every parent knows the struggle of weeknight dinners. The hours of five to eight p.m. are rushed Monday through Friday, no matter what you do. You're attempting to manage cooking something vaguely nutritious that you haven't made every night for the past three weeks on top of getting the kids to bed on time, and the takeout menus always eye you from the junk drawer by the fridge, almost begging you to say screw it and order the pizza the tiny humans have been clamoring for. But Costco's new ready-to-eat taco kit can end dinnertime stress once and for all. Takeout menus, meet the recycling bin.

Costco is known for its life-saving food hacks, from hidden gem appetizers that can make a party to heart shaped dinners for Valentine's Day you didn't even know you needed. I would 100 percent head to the nearest Costco during a zombie apocalypse because they'd have everything I needed to survive, including a literal end of the world survival kit. But everyone's favorite superstore and cheap date night location (wandering Costco's aisles and eating the free samples is a date night, don't @ me) has somehow gotten even better, adding an all-in-one taco kit to their repertoire. That's right: tacos at home just got as simple as grabbing a box.

Instagram account Costcodeals showcased the kits, and they look freakin' delicious in my professional opinion. It's got everything you need for a full dinner for the little monsters — soft taco shells, cheese, lettuce, limes, chicken, salsa, and even a cilantro lime sauce. One kit includes enough materials for 12 tacos and only costs $16, which is only $1.33 per taco as Scary Mommy points out, and that's a hell of a deal for a one-stop meal that will take you less than five minutes to put on the table. Pair the easiest tacos ever with Costco's Late July multi-grain tortilla chips, and you'll actually have time to watch The Bachelor live for the first time since you had kids.

One down-side: I'm only seeing the kits with chicken as the main kit ingredient so far, so you might be out of luck on the taco front if you're a vegetarian fam or if your kids are against chicken for some reason. But don't fret — there are still plenty of other Costco food faves you can use to make your fam's weeknights a bit easier. Honestly, your struggle isn't going to be finding something at Costco to give your family for dinner; it's going to be choosing what to serve them from the superstore's thousands of options.

Seriously, Costco has more grocery items than I can even begin to wrap my head around. Every time I make a pilgrimage to the store, I end up buying the same three things I always get because I get overwhelmed by everything there and miss out on all the creative and delicious foods they have hiding in their aisles as a result. I should probably make my New Year's resolution to get to know the store better, but it would take actual years to get to know all of Costco's products because of the sheer volume. But there are some shopping hacks that can make it a bit easier, so it's not impossible. In the meantime, hit up those tacos, and make the most out of the time you'll save.