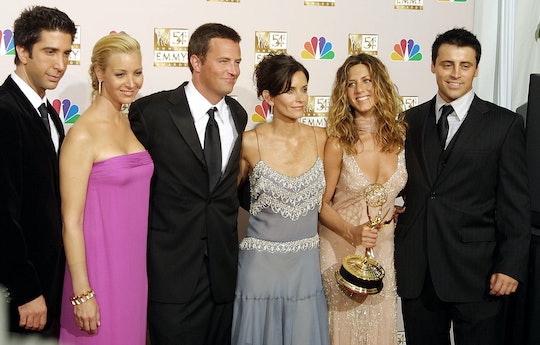 It's not healthy to live in the past, this is the thing I hear all the time. In most cases I suppose this is probably quite true. Except when it comes to a person's enduring love of Friends and holding on to the dream that the cast will reunite one day. Obviously I'm not giving up on that, especially now that Courteney Cox shared a new Friends photo of the gang hanging out on their last day of shooting. If she can't let it go I don't have to either.

On Thursday the actress formerly known as Monica Gellar-Bing posted a throwback photo of some of her well-known friends on Instagram. Namely, Jennifer Aniston (Rachel Green), Matt LeBlanc Joey Tribbiani), Matthew Perry (Chandler Bing), David Schwimmer (Ross Gellar), and Lisa Kudrow (Phoebe Buffet). The picture was apparently taken of the last supper the group ate together when they filmed the final episode of Friends in 2004. It seems Thursday was exactly 16 years to the day after that taping, which Cox noted when she captioned the photo on Instagram, "“The Last Supper” before taping “The Last One” on Jan 23, 2004. #tbt #friends."

At least it looks like they had one heck of a feast.

Some of Cox's fellow Friends cast mates took to her wall to share their feelings about the sweet photo like Jennifer Aniston who simply commented with a bunch of crying emojis. And Lisa Kudrow who wrote "Awwww" because that says it all. The photo comes at a time when talk of a Friends reunion is at an all-time high, with The Hollywood Reporter noting in November that the cast is apparently in talks to potentially film a reunion special with HBO Max. And of course, Jennifer Aniston herself fueled the Friends fire when she finally joined Instagram and basically broke the social media platform with her first photo, a group shot with the Friends gang hanging out in real life in October.

I'm not sure what it is about the cast of Friends that makes so many of their fans long to know they're still hanging out. Still close to each other after all these years. I suppose it has something to do with wanting to believe their lovely connection on the show is real, or maybe that friendships really can span decades.

All I know is this; I'm happy they're still friends. And that there still might be Friends in our future.