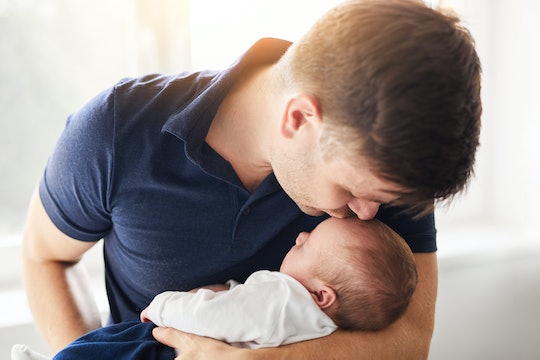 For my husband, Father's Day is a non-holiday. Every year I ask what he'd like to do and he always answers: "Just... dad stuff." So Father's Day is like any other lazy Sunday at our house. He's an incredible father, though, and I would love to pay him a gushy Father's Day tribute. But since that would be antithetical to his own preferences, I'm going to speak the men who could learn from my own wonderful human. So, Dear first-time dad: please allow me to drop some love and knowledge on you that I've learned via my husband (winner of our family's Father of the Year award, six years running) about how to make the most of your fatherhood.

Of course, I can't tell you what it's like to be a father, because I'm a mom and while there's a whole lot of "parenting" overlap between moms and dads, being a father is its own unique, wonderful, crazy, messy, weird experience. This is in no small part due to the ideas society will offer you about what it means to be a mother or a father. But I can tell you the things I've observed, learned, and discussed with my husband, a 35-year-old father of two.

This nope can be nuanced, but generally fall into three obnoxious categories: the dismissers, the underminers, and the worshippers. All of these people, regardless of their intentions, can (if you're not careful) stand between you and fully engaging in and enjoying your fatherhood.

There's a lot for you to do and think and feel and, yes, it goes along with a lot of work, but the work is worth it.

First are the dismissers. These are the people who don't take fathers or fatherhood seriously. You probably know the type. They're the ones who just don't see fathers as having all that much to do, the ones who, whether they recognize it or not, put all child-rearing responsibility on mom. They don't see the need for paternity leave, or for a father to adjust his life to accommodate his family responsibilities. At the far end of the spectrum they'll describe dads as hapless dopes who just don't know WTF they're doing. These people are pretty prominent and, most of the time, they don't recognize that they're dismissing the importance of fathers and fatherhood, largely because this is very often the societal default setting. They think it's nice, sure, but not terribly important. At least not as important, they believe, as motherhood is to a woman or as mothers are to their children.

Don't buy into this. Don't accept this world-view as "the way things are." Don't limit the scope of how engaged you can be based on the idea that you, as a father, are "less than" or less entitled to fulfillment through parenting. This isn't to say you have to go to the extreme some people have with mothers, and view parenting as the alpha and omega of human existence or the only thing that can give you purpose (that's nonsense of another kind), but don't let other people's perceptions of what fatherhood is limit the richness of this experience. There's a lot for you to do and think and feel and, yes, it goes along with a lot of work, but the work is worth it.

Do not let any of these people dictate what it means to be a dad or stand between you and the tremendous, and exhausting, joy of being a father.

The next group are the underminers. These are the people who, deep down, I think, know that fatherhood can be more than a lot of people give it credit. But rather than fight the status quo they dig in their heels and would ridicule anyone who does challenge it. These are the people (who are, I'll say it, almost always men) who actively discourage men from engaging as a parent beyond throwing a football with their son from time to time. "You change diapers?" they'll crow. "Oh man, you're pushing a stroller? You're wearing your baby? You're whipped, bro!" These are the kind of people who are fond of the phrase "Mr. Mom" and revel in telling you how lame you've become or how much your life is over. It's different than standard ball-busting: there's a meanness to it. A sharp, insecure edge.

Depending on your personality, these guys may be easier to ignore than the dismissers, or it might be really hard not to get defensive. Please allow me to assure you: these people are jerks and they don't know what they're talking about. Their stupid razzing is a small price to pay for enjoying your fatherhood to the fullest.

This brings us to the last and trickiest group of them all: the worshippers. These are usually women, and they are really, super nice.

"Oh my gosh! Look at what an amazing father you are! You're feeding your baby! That's awesome!"

"Wow! You gave your baby a bath! That's so sweet! Your partner is so lucky!"

"You sing to your baby? You're basically a god among men!"

Look, I will admit to being a total attention junkie and, honestly, other people's approval is like a drug to me. So I understand the appeal of the worshippers and how great it can be to nestle into their loving words and bliss out. But don't. Don't, because that praise is a siren song and, as the Greek mythology buffs among us will remember... sirens sing you to your death.

Listen to your baby, your partner, and most importantly your heart.

Really, the worshipers are the other side of the dismisser coin. They're praising you for things you should be doing as an engaged and responsible father. It's not all that miraculous for you, as a parent, to feed, bathe, or soothe your child. But it's easy for this to go to your head. And when that happens, it's easy for you to think that the bare minimum is all there is, so you rest on your laurels, smug and cozy in the knowledge that you're such an amazing dad. And that's not to say you're not an amazing dad, but it's not because you've, like, given your kid bottle at a designated feeding time.

The moral of this story? Do not let any of these people dictate what it means to be a dad or stand between you and the tremendous, and exhausting, joy of being a father.

You have a lot to learn, first-time dad, but you'll learn none of it from these folks. Listen to your baby, your partner, and most importantly your heart. I know it sounds corny to tell someone to listen to their heart, but it really will be your most useful (metaphorical) organ in this big crazy adventure you've launched yourself into.