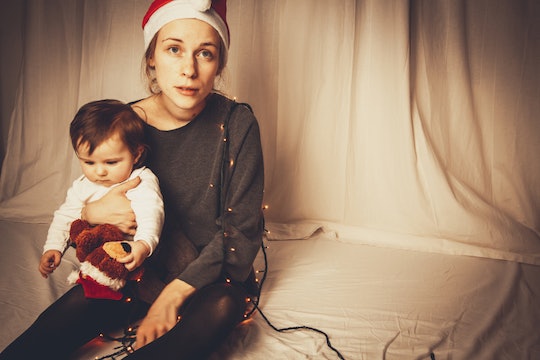 Dear Husbands, It's The Holidays & You Need To Step THE EFF Up

I love December. Overnight, it seems, decorations appear, presents arrive on the doorstep, and plans are laid for holiday gatherings... OK, so if you were nodding your head along to any of that then this article is for you. Because guys? None of that stuff happens "overnight." Someone makes it happen... no, not elves. It's almost always women, whose families are beneficiaries of all this holiday cheer. So, I'll be blunt: husbands, you need to step it up this holiday.

I'm going to cut you off at the pass before I hear anyone utter those dreaded words: "Not all men!" This version of events doesn't resonate with you or reflect your life? Great! Then it's not about you! Move on (or keep reading with a sense of smug satisfaction that you're doing better than other people; your call). Seriously though, obviously not all men. I understand that. But lots of men. Too many men... and I feel like everyone quietly knows that. In fact, a study by the American Psychological Association (APA) found that while 41 percent of men found the holiday season relaxing, only 25 percent of women could say the same... and considering the same study found that women are shouldering more of the the responsibilities for creating a joyful holiday, it's no wonder. From cooking (66 percent of women versus 35 percent of men), extra grocery shopping (52 percent of women versus 32 percent of men), and cleaning the dirty dishes after the holiday feast (70 percent of women, versus 41 percent of men), women appear to be doing a lot of the heavy lifting, to say nothing of decking the halls, buying (and wrapping) gifts, or making plans with other family members.

When I was a kid, and even as a young adult, I was among the blissfully ignorant who had no idea what it took to make a happy holiday. The extent of my preparation was writing a list of stuff I wanted and magically finding some or all of it under the tree on December 25. I didn't worry about decorating (when the tree was ready my parents called me into the living room and I put on ornaments until I got bored), when I was baking cookies, whose house I would celebrate in, and even, when I was very young, what festive ensemble I would wear. All of this was managed for me. My mom flitted through the season like a cruise ship director telling me when I was to do what and it was awesome.

But then I had kids and I was the mom and it's like "Game on, girl." Because it's one thing to do a couple of tasks to contribute to your own holiday, but it's a whole other ball game to create a holiday for your own family. (And, of course, you want the happiest holiday ever for your beloved monsters.)

So it makes sense that moms across the world are hauling out the holly and dusting of the menorah and putting together shopping lists and hiding everything well enough so the kids don't stumble upon anything before they're wrapped and ready to go, and frying jelly doughnuts, and baking cookies, and figuring out what to buy teachers to show appreciation, and coming up with new things for that goddamn elf to do every day for the month of December.

What doesn't make sense is that dads really aren't. Or certainly not to the extent moms are. It's not like we don't have the same kids. It's not like you like the holidays any less than we do. So what gives, guys?

OK, look, I kind of get it: women have, perhaps, been cultured to do the holiday stuff because, traditionally, the home was the only sphere we were allowed to be in control of (and even there, only to an extent). So, for generations, women have seen their mothers and grandmothers preparing for the holidays and it makes sense that we would emulate them, especially when we have kids. But a couple things with that...

Not only were our mothers and grandmothers were less likely to work full-time jobs outside of the home (which seriously cuts into our "home and hearth" time) but the holidays weren't always this big. And that's not to say everyone has or is obligated to have a big flashy holiday... but just by virtue of living in a holiday-season obsessed culture, it's a bigger deal than it used to be. Seriously in Little House on the Prairie Laura Ingalls got a tin cup and an orange and then she skipped off to do chores. Back in the day, Christmas Day was... a day, not a season. You certainly didn't start seeing holiday displays in October. And Hanukkah? Hanukkah looked nothing like it does today until, generously, the 1920s.

So, dear husbands of the world, if you want the kind of holidays you're seeing all around you, the ones you've grown accustomed to, then it's only fair that you help. It doesn't have to be a big deal: many hands make light work... or at the very least less work. Here's what you do...

Around Thanksgiving, think about what you like about this season —what you're looking forward to, what traditions you enjoy — and then do the things that need to be done to make those happen. If you don't know what it takes, ask your wife. Whom do you still need to shop for? What needs to be wrapped? Where can the decorations go? What cooking needs to be done? Ask her if there are things she needs help with.

Deal. With. Your. Own. Damn. Family. (Honestly: they're related to you. Why should your wife run interference and shop for them? This is a simple yet huge task you can really help out with.)

And ladies: let me talk to you for a second. Lean in close...

Let this happen. This may, at times, be hard. There's a good chance he may not do things as smoothly or as expertly as you. He is learning and he will learn. Having one holiday where the cookies are burnt or the gift-wrapping looks wonky is going to be worth the fact that you will have a partner in holiday planning for years to come. Ignore any snickering that comes from judgmental aunties or in-laws. Ignore your own perfectionism. Overcome the idea that you're sharing control. This is the best long-term plan possible.

No, husbands, the holidays do not magically manifest. Frankly, you're far too old to believe in such beautiful whimsy. But, with your help, you can help create that feeling for our kids.

After experiencing a traumatic c-section, this mother sought out a doula to support her through her second child’s delivery. Watch as that doula helps this mom reclaim the birth she felt robbed of with her first child, in Episode Three of Romper's Doula Diaries, Season Two, below. Visit Bustle Digital Group's YouTube page for more episodes.

More Like This
Festive Mommy & Me Holiday Nail Ideas To Try
101 Advent Calendar Activities, From Books To Read To Cookies To Bake
The Best Black Friday 2022 Deals For Moms
Your Guide To Tipping Day Care Workers For The Holidays