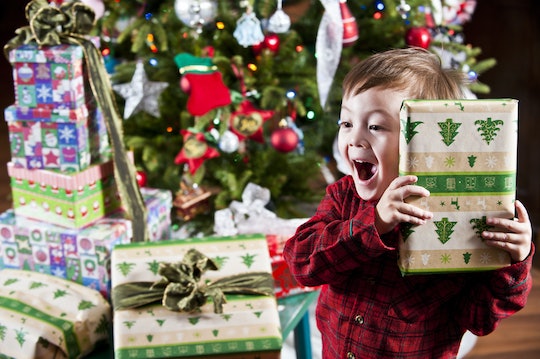 Remember when you were little and you first heard the old adage, "It is better to give than to receive"? I do, and I immediately thought, "Well that's a load of crap." Let's be honest — you're not going to find a single child who truly takes more pleasure in giving than getting gifts. Truthfully, I didn't really feel the truth behind those words until I had children and wanted to give them the jolliest Christmas possible. Fact: kids make Christmas better. Can the holiday be fun without them? Of course. However, while I often take a sincerely nuanced and flexible stance on all issues pertaining to kid-friendly vs. kid-free, this is one place where I'm fine stating that I feel kids unequivocally improve the overall experience.

I have never in my life been a "Grinch," but I'd say my overall Christmas experience declined and flat-lined between the ages of 10 to 28. I liked the day off. I liked the presents. I liked the decorations. Other than that? Meh. If I missed Christmas any of those years, I wouldn't have been devastated. It's just a lot, right? Lots of shopping. Lots of travel. Lots of obligations. Lots of stuff. Being the hippie that I am, I couldn't help but think of the holiday as a commercial smorgasbord that could seriously get out of hand.

My first child was born in September of 2011 and even his first Christmas didn't really get me into the spirit. Yeah, babies are kinda fun on Christmas. You can put them in adorable corny sweaters and post a picture of them wearing an over-sized Santa hat or antlers or something, but that's kind of it. Bless their hearts, but they don't really do all that much. We took advantage of our son's obliviousness by not bothering to buy him Christmas gifts; the kid was pretty preoccupied with trying to eat his toes at the time, so I doubt he would have known what to do with a toy even if we'd given him one.

But as the years went on (and he was joined by his sister), his understanding of (and enthusiasm) for Christmas steadily grew, and as it increased it became downright contagious. Around the time he was a 2-year-old toddler, my Christmas cheer levels were higher than they'd been in 20 years. Just as the Whos down in Whoville made the Grinch's heart grow three sizes, so to did my children make my holidays brighter.