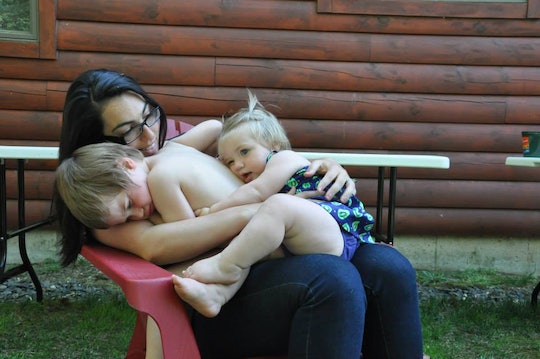 Dear Moms: It's OK To Admit You "Have Your Hands Full"

Every few months, a mom of more than one child shares a public encounter she had with an older woman. This older woman looks at the mom and her brood and says with a smile, "You look like you've got your hands full!" Said mom then comes back to me, or me and a group of friends, and says, "Ugh! Why say that?! What do you want me to say to that?! Mind your business!" To be honest, I don't get the angry reaction. It's OK to admit you "have your hands full," moms. In fact, we all should.

Of course, you're entitled to any reaction you have. And I can understand why someone pointing out how busy and exhausted you are is annoying, particularly since there is a matter of time, place, and tone. For example, if my kids are having "a moment" (read: acting like escaped zoo animals) and I'm trying to wrangle them as best I can, a snide "you look like you've got your hands full" isn't helpful. Even a friendly interjection while I'm obviously busy and not able to join a conversation isn't exactly appreciated. But, for the most part, these aren't the moments I'm talking about. I'm talking about when someone is just walking with their kids and another woman, older than them, will say "you look like you've got your hands full!" in a neutral to friendly tone. If your kids are just sitting in a shopping cart, keeping it together, and someone points out how busy parenting two children must be, in a non-passive aggressive way, I truly do not see the problem.

When I talk to my moms friends about motherhood our conversations, at least 50 percent of the time, revolve around how busy us moms are and how hard this parenting thing is and how we're all barely managing to keep it all together. In the presence of trusted friends, we're more than happy to talk about how full our hands really are: we just don't want anyone else, i.e. strangers or older moms who have already been there and done that, to notice.

Seriously, ask any mom if being a mom is hard and, unless she's a lying liar, she'll tell you that it's incredibly difficult. So why do so many of us bristle when we hear how hard motherhood is from someone else?

For starters, women are pressured to be perfect and we take it as a personal failing when we're not perceived to be. It's one thing to admit to each other, in the quiet of a private space, that motherhood is hard. It's another thing to fear that the public mask has slipped; to know that it might look like we're trying. Because on top of the general, misogynist crap we have to deal with, the social expectations of motherhood are its own special level of hell. We've been subtly and not so subtly told being a mom should look effortless and we should never be anything but grateful for the opportunity to raise our children. And I'm not saying perspective isn't important, but it's hard to really exude gratitude when you're literally covered in baby poop and your toddler is throwing a tantrum because they've realized they have ankles.

Even the well-intentioned efforts I've seen on social media to "keep motherhood real" has its pitfalls. There seems to be a very stylized, particular way you're allowed to delve into the realness. It's still either sort of schmaltzy ("...but it's all worth it!"), witty (framed as a joke you only thought of after it happened), or, frankly, pretty sanitized (how many times have I seen someone "keep it real" by showing a picture of their "messy" house and it's just a single muddy footprint in an otherwise immaculately maintained, beautifully decorated home?).

Even if we're perfectly poised and our kids are on their best behavior, they know what kind of effort is happening behind the scenes.

Now there seems to be a way to be perfect and a way to be imperfect. While any step toward honesty is a step in the right direction, we have to admit that performative "realness" is still not real life. Hell, I'm guilty of shoving a more embarrassing mess out of the frame even when I'm capturing an artfully messy moment. I've used filters. I've framed the experience through a joke. That process of framing and editing is show, too. I don't expect social media shares to have the same gritty realism as war journalism, but I think it's important to see that even this doesn't really allow us to fully and publicly show how full our hands are.

Of course, and thanks to misogyny, women are pitted against each other all the damn time, too, and there's a particular power dynamic between older and younger women that we can't ignore. So when an older woman seems to call us out for not appearing to be perfect, we are trained to see it as a criticism.

But I don't think the women who say we "have our hands full" are doing so maliciously. I think they're viewing us as their peers and offering up some solidarity. I think this is especially true when older women make these comments, and probably see their past lives being played out before them through us. They've been in our shoes, and they know we have our hands full because they remember how full their hands were. Even if we're perfectly poised and our kids are on their best behavior, they know what kind of effort is happening behind the scenes. They want us to know they get it and, I think, they want an opportunity to talk about that past life.

If they want to offer support or just reminisce about their own parenting trials and tribulations, that's cool.

Maybe it's the generational barriers that are usual in place that keep us from recognizing a subtle nod when one is thrown our way, or maybe it's just generational communication style differences, but from our perspective it can be hard to see these moms make a genuine attempt at a connection and not assume the worst. "You look like you've got your hands full" is, to me, a kind of clumsy, older mom way of raising a fist in solidarity and saying, "I see you mama. Rock on."

So, no, I don't mind if anyone sees me with my two kids and let's me know that I do, in fact, have my hands full. If they want to offer support or just reminisce about their own parenting trials and tribulations, that's cool. Because this whole motherhood thing does take a lot of work and, rather than pretend it's effortless, I'll appreciate someone acknowledging just how full my hands are these days.