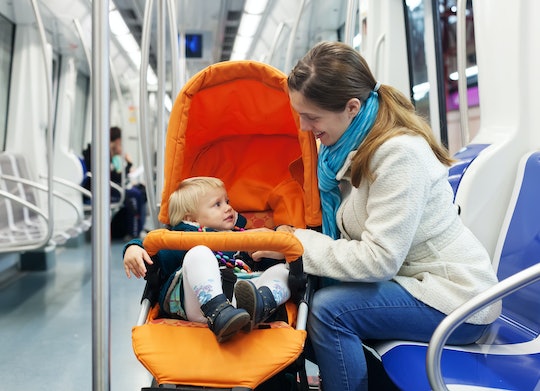 With an 18 month old at home, I haven't experienced too many moments when my daughter has misbehaved in public. My partner and I have had glimpses of the tantrums to come, but she's typically too excited to be out and about to throw a fit. That said, I know it's on the horizon and I'd much rather get ahead of this game. So, with that in mind, I'm already committing to make these ricks parents use to get their kid to behave in public our collective family reality.

Our first real glimpse of what's to come with our daughter has been her unwillingness to get into her car seat, usually when I've found the best parking spot right near the main doors to Target, meaning there's a constant flow of people creating an audience she's apparently excited to perform for. But after several sweaty struggles trying to get her buckled in, I've realized that the best way to get her into her seat is to explain exactly what's going on. So many times, I think we believe our kids are too young to understand what's going on, so we don't bother explaining everything. I've lately adopted the mentality that my daughter can understand everything, and I explain everything as much as possible. Of course, this isn't always true, but it's a good habit to get into as she understands more and more every day.

I've had great examples for encouraging children to behave in public by watching my friends parent their older kids. Each parent who seems to enjoy the most success are the calmest, but also the most honest with their kids. They don't lose their cool or resort to the iPad at the slightest sign of an impending tantrum. Instead, they are proactive in encouraging good behavior, and employ a few tricks ahead of time, especially during events or occasions when behavior is important.