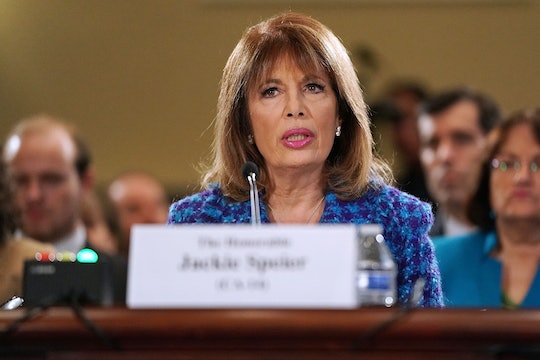 Looks like the Golden Globe Awards were just the beginning: at President Donald Trump's State of the Union address Jan. 30, a group of Democratic women will wear all black in an act of symbolic protest, according to NBC News. And when they do so, they'll definitely be sending out a strong message: Trump's State of the Union speech to Congress — one of his Constitutional duties as president — will be his first ever, and it will no doubt be highly anticipated. So while the lawmakers of the Democratic Women's Working Group will be bringing the anti-sexual harassment #MeToo and Time's Up movements once again to the forefront in a very public way, they'll also be doing so in front of a president who himself has been accused of alleged sexual misconduct by as many as 21 different women, according to The Huffington Post (Trump has denied the allegations, and Romper's request for comment was not immediately returned.)

The decision is also a particularly poignant one in Congress though, where several members have resigned from office in recent weeks due to sexual misconduct allegations. In December, former Minnesota Sen. Al Franken resigned after multiple women came forward with allegations of sexual misconduct against him, according to ABC News, and only days before, former Michigan Rep. John Conyers announced his retirement amid sexual assault allegations (Conyers has denied any wrongdoing).

Arizona Rep. Trent Franks also announced his resignation in December, after two former staffers accused him of asking them to act as a gestational surrogate for him and his wife. In a statement, Franks acknowledged that he'd had a "discussion of surrogacy with two previous female subordinates," and said "I deeply regret that my discussion of this option and process in the workplace caused distress." The same month Texas Rep. Blake Farenthold announced he would not be running for re-election following allegations that he used $84,000 of taxpayer money to settle a sexual harassment suit brought against him by a former aide, according to CNN. In a statement responding to the allegation, Farenthold said, "I can neither confirm nor deny that settlement involved my office as the Congressional Accountability Act prohibits me from answering that question," but that he "100% [supports] more transparency with respect to claims against members of Congress." Romper's request for comment was not immediately returned.

According to California Rep. Jackie Speier, who has helped champion the #MeToo movement in Congress and who will be one of the women wearing back during the State of the Union address, the changes being made on Capitol Hill couldn't come soon enough. Speier told CNN that the #MeToo movement is "a culture change that is sweeping the country," and said, "Many of us in Congress know what it's like, because Congress has been a breeding ground for a hostile work environment for far too long."

The power of the black clothing statement, of course, was seen pretty clearly at the Jan. 7 Golden Globes award ceremony, where the majority of actresses walked the red carpet in black dresses and suits — and where many also brought activists to the ceremony as their plus-one, according to Variety. That (finally!) gave way to a red carpet conversation that wasn't focused on the women's looks or outfits, but on topics that actually matter. Best of all though, that spirit of solidarity and female assertiveness continued throughout the entire broadcast, in moments like Natalie Portman's IDGAF introduction of the "all-male" nominees for Best Director, or Oprah Winfrey's rousing Cecile B. DeMille acceptance speech, in which she spoke about the way in which men have long used their power to silence women, before proclaiming to the room, "but their time is up."

It's not entirely clear what kind of response the same statement will make in Congress — while the Golden Globes is still ultimately a night celebrating entertainment, the State of the Union is a serious event, and with such deep political divisions throughout the country as a result of Trump's presidency, the Democratic women's decision to wear black will likely be dismissed by many on principle. The POTUS himself might also choose to ignore the move, though it also seems entirely reasonable to expect the women will at some point be on the receiving end of a not-so-nice tweet.

Even if the statement doesn't make as much of a splash as it did in Hollywood though, there's no question that it will absolutely still matter. That's because every time women speak out publicly and demand that their rights be respected — and every time we support the women who are doing it — the harder it becomes to push the idea by the wayside, and the more likely it is that change is possible. So while the Trump administration may not be pleased with the lawmakers' wardrobe decision, it's probably safe to say that many people will definitely be looking forward to seeing the black-clad Democratic Congresswomen — and hopefully there may even be some Republican women, and men from either side, choosing to join them.