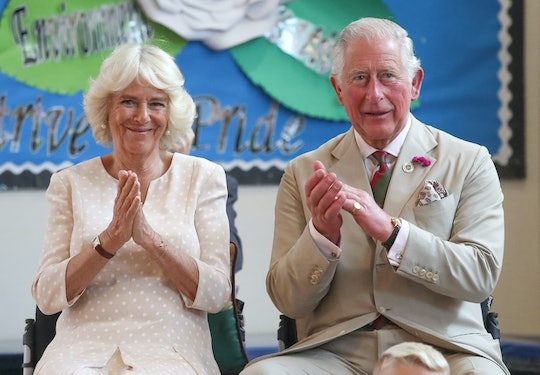 I think it's safe to say pretty much everyone on the planet is well aware that Prince Charles, presumptive future King of England, has been married twice. The first time was to Lady Diana Spencer in 1981. The two were married until 1996 and shared two children together, Prince William and Prince Harry. In 2005, Prince Charles married Camilla Parker-Bowles, the very same woman he was having an affair with during his first marriage. These are the facts almost everyone knows, but not everyone can remember every detail. For instance, if you're wondering whether or not Princess Diana and Duchess Camilla ever met, you're going to be in for a bit of a roller coaster ride. Because things got pretty interesting in the royal family.

Camilla Parker-Bowles and Prince Charles actually first met at a polo match in Windsor Great Park in 1970, where the two clicked instantly over a shared sense of humor and the fact that, apparently, Camilla's great-grandmother had an affair with his great-grandfather, King Edward VII, as per Town and Country. The two ended their relationship when Prince Charles left for the Royal Navy, and by the time he returned she was engaged to Andrew Parker Bowles. Despite the end of their relationship, the two stayed incredibly close. So much so that Camilla was actually at Prince Charles' wedding to Diana in 1981; already Princess Diana had an inkling that something more than friendship was going on.

Princess Diana told royal biographer Andrew Morton during an interview in 1991, as she and Prince Charles were preparing to dissolve their marriage, that she scanned the crowd of 2,500 people at Westminster Abbey for Camilla when she walked down the aisle, as per Good Housekeeping:

I knew she was in there, of course. I looked for her. So walking down the aisle, I spotted Camilla, pale gray, veiled pillbox hat, saw it all, her son Tom standing on a chair. To this day you know — vivid memory.

So why was 20-year-old Princess Diana looking for an old friend of her husband's on her wedding day? It seems she already had her suspicions that the two were more than friends. As Morton wrote in his biography Diana: In Her Own Words, the Princess of Wales said she had endured a strange meeting with Camilla Parker Bowles before their marriage. Camilla had invited the young Diana out for lunch, despite being virtual strangers, and spent much of the time asking her if she planned to join the hunt at Highgrove, as per The Daily Express. Which Princess Diana understood to mean she hoped to continue her time (and allegedly her affair) with Prince Charles there.

Princess Diana found her fears to be confirmed by the end of the couple's marriage in 1996. Just one month before she lost her life in a car accident in Paris in August, 1997, Prince Charles was hosting a 50th birthday party for Camilla Parker Bowles at Highgrove, his country home.

It was clearly a difficult situation for everyone, perhaps made much more so by the fact that Princess Diana was forced to socialize with Camilla Parker Bowles.

I think we can all agree, no one would want to be in that situation. Ever.