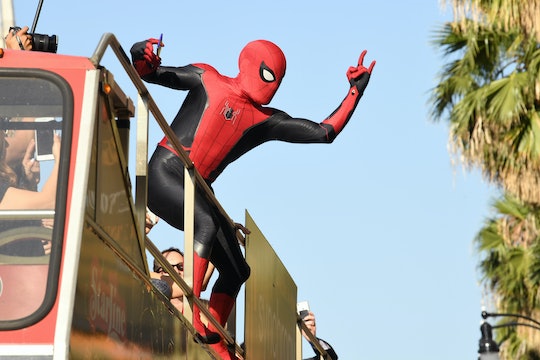 My kids were obsessed with super heroes I think probably from the womb onward. I didn't have an issue with my little ones wanting to identify with the web-slinging hero Spider-Man, for instance, but I did struggle with the whole age appropriate thing. While my older two sons were watching super hero movies, my little boys weren't quite ready to deal with the violence and the mature themes, but they also weren't ready for me to take all of their dreams away from them. How I would have loved Disney Junior's new Spider-Man show for preschoolers. They get all of that super hero action without any of the content they might not be old enough to understand.

Last week Marvel announced it would be launching a new show called Spidey and His Amazing Friends on Disney Junior at the D23 Expo 2019, the official Disney fan expo, according to IGN. The new show will feature Spider-Man fighting crime alongside his pals like Miles Morales, who was introduced in the 2018 animated feature Spider-Man: Into The Spider Verse, as well as Gwen (aka Ghost Spider), the Hulk, Black Panther, and even Ms. Marvel. The difference being that in this new series, little ones will be able to invest in the characters they already love in a more age-appropriate way.

Preschool kids already love Spidey, so they’ll be delighted to have Peter Parker thwipping across their screens in this new series. Everyone at Marvel is thrilled to launch our first preschool series on Disney Junior, the gold standard platform for the audience. We believe parents and kids will be excited about these stories filled with themes of friendship, cooperation, solving problems and using your abilities to help others.

This is good news for parents whose kids, as Lane noted, could already be a fan of Spider-Man but aren't really old enough to watch movies like Spider-Man: Far From Home, which seems to be tailored for an older market. Because let's face it, trying to turn kids away from superheros can feel like an uphill battle, especially when the toy section of every department store is inundated with all of their favorite characters. Joe D'Ambrosia, senior vice president, Original Programming and General Manager, Disney Junior, told Marvel.com:

We're thrilled to be working with Marvel on this new series showcasing the exciting adventures of Spidey and his friends as they model the importance of teamwork and helping others in their community. This is the perfect series to introduce preschoolers to the super hero powers of friendship and working together to help others in need.

So that's the good news, folks. The bad news is that Spidey & His Amazing Friends won't launch until 2021, nearly two years away. I know it seems like a long time to wait but just think of all the Spider-Man related things you can do in the meantime. Or at the very least, all of the Spidey-themed products your kids will continue to beg you for, because I promise that won't stop any time soon.