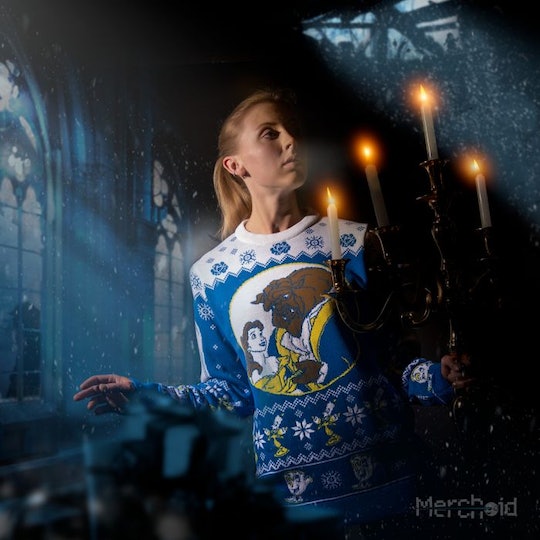 It's true: In case you haven't heard, the ugly Christmas/holiday sweater thing has absolutely exploded. There are ugly sweaters for pets, ugly sweater parties, an ugly sweater cookie decorating kit... there's even a National Ugly Sweater Day (which falls on December 20 this year, according to National Today). In other words, there will almost definitely be an occasion this holiday season which will require you to wear one of these things... or risk being called a major Grinch.

Enter these super fun and festive sweaters from Merchoid. Billed as the only 100 percent genuine, officially licensed Disney Christmas sweaters out there, these jumpers have all the warm and fuzzy stuff going for them that all holiday sweaters should... only they're even better than most holiday sweaters, because Disney. Imagine the "jolly holiday" you'd have with this Mary Poppins-themed option:

Available in sizes XS through XXL

And how cute are the names of these sweaters? Like this one: The Little Mermaid: Part Of Your Holidays Knitted Christmas Sweater. Under almost any other circumstances, the combination of red lobsters, yellow fish, blue waves and a green-tailed mermaid on the same piece of clothing might seem like too much... but since this is an ugly Christmas sweater, it's really just enough.

Available in sizes XS through XXXL

Romantic types will swoon over this Beauty and the Beast sweater, with Belle and the Beast gazing at each other adoringly front and center. And, as the website put it: "No holiday dinner table could be called complete without Chip and Lumiere."

Available in sizes XS through XXXL

These aren't the only designs available; there are also sweaters for fans of Aladdin, The Lion King, and The Nightmare Before Christmas.

Maybe you've already got a drawer full of ugly holiday sweaters. Maybe one of the above knits will be your very first ugly Christmas sweater ever. Either way, if you're a serious Disney fan, you'd probably snap one of these right up even if it wasn't "in style" at the moment. How could you even live with yourself knowing ugly Christmas sweaters honoring your favorite Disney movies exist if you didn't own one (or more)? If you're like the Disney collectors I've met, you couldn't.

Finally, to be fair, these sweaters aren't technically "ugly." Sure, they clash and they're loud and garish, but it just seems wrong to use such an insulting term when describing an article of clothing with a beloved Disney character on it. But as the Merchoid website so eloquently stated, "the only thing more powerful than Disney magic is Christmas magic — double up!"

Oh, and one more thing: Even magic runs out (remember the rose in Beauty and the Beast?!), and these sweaters are already selling out fast. So if you have your heart set on doing the Disney thing this National Ugly Sweater Day... don't delay.