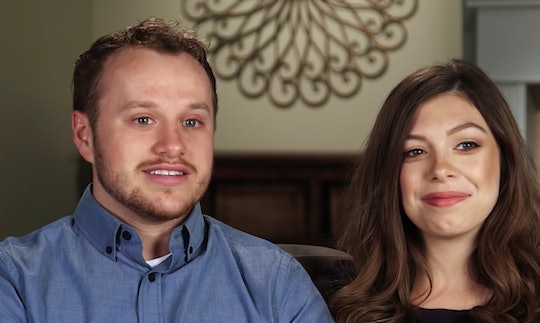 Now that Josiah and Lauren Duggar are nearly one month into new parenthood after welcoming their first child, a daughter named Bella Milagro, together in early November, some interesting information about their baby girl's name has come to light. In a new episode of TLC's Counting On, Josiah and Lauren Duggar hinted that they want more kids in the future while revealing their naming strategy for any new family additions.

Lauren gave birth to their daughter Bella on Nov. 8, nearly a year after the couple suffered a heartbreaking miscarriage with their first child, who they named Asa, in 2018. While Counting On fans have been able to follow along with the couple in real time on social media, their family's reality show on TLC is currently catching up to moments from Lauren's pregnancy with Bella. And during the most recent episode of Counting On, Lauren and Josiah revealed their baby's sex to their family members as well as her pretty name, which means "beautiful miracle" in Spanish.

The couple also revealed that should they have more children in the future, they have a plan for how they'll pick out their names. "We're doing it in alphabetical order, so we had baby number one, which is Asa, who we didn't get to meet," Josiah explained on Counting On. "And then baby number two [Bella] is going to begin with a 'B'."

Josiah explained that they really liked the name Asa for the child they lost, and Lauren really liked Bella for their daughter. And after realizing the alphabetical order trend, they decided to stick with it. So whenever they decide to give Bella a younger sibling, it sounds like they'll be picking a name that begins with "C."

"We're doing it in alphabetical order so when we get to Jim Bob, if it's a girl, we'll name her Jim Bob," Josiah joked to his dad during the recent Counting On episode. "Jim Bobbie," Lauren's dad, Dwain, added.

This naming trend is not only pretty creative, it also undoubtedly will help narrow things down a bit for whenever they're trying to decide on a name for their next bundle of joy, aka Baby "C."