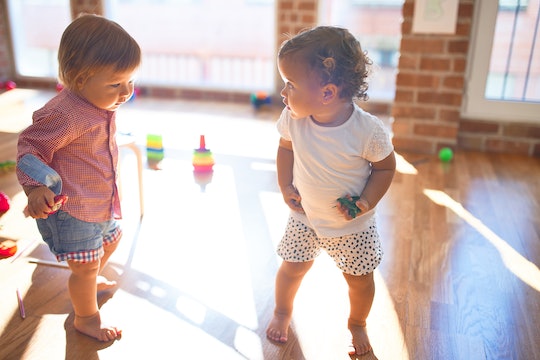 So It Turns Out Toddlers Actually Can Get Embarrassed, According To Experts

Anyone who has spent any time with a toddler knows they are wont to do, say, and throw whatever the heck they please, with little (i.e. zero) thought as to how their bonkers actions are perceived by the public. The world is theirs to enjoy/destroy, and we are all just bystanders bearing sippy cups and Cheerios. It makes one wonder: do toddlers ever get embarrassed?

I know when the words "embarrassment" and "toddler" are strung together, it's usually when one is relaying a story to a friend... like how their son pulled down his pants in Applebees and shouted "Mommy's buh-gina is waaaay bigger than mine!"

We don't really think of toddlers as being embarrassed... hiding behind lace fans... quietly blushing. Especially as they are much more likely to throw a lace fan into the toilet and pretend it's Cinderella drowning. I mean, these are individuals who are prone to raking foods they don't like to the floor, and to asking the mail man why his nose looks so weird. But believe it or not, toddlers do in fact get embarrassed.

Dr. Tina Bryson is a psychotherapist, and the founder of The Center for Connection and Play Strong Institute. Her forthcoming book is The Power of Showing Up: How parental presence shapes who our kids become and how their brains get wired. Bryson says that newer research shows that toddlers can get embarrassed far earlier than previously thought: "Some studies even indicate that toddlers may begin to experience these types of emotions around 18-24 months. If you think about it, this is pretty remarkable," says Bryson. "Think about what is required for these emotions to emerge. They must realize they are a separate 'self,' that their thoughts are different from other people’s thoughts, and that others may judge them or see them in negative ways. This is super complex thinking and a sophisticated 'theory of mind.'"

And what, pray tell, is embarrassing to a toddler? "They tend to be more easily embarrassed with strangers than they are with siblings and parents, and people they're really comfortable with," Bryson explains. "Really young kids might experience embarrassment when they get caught doing something they know they are not supposed to be doing. Or if they are performing, like dancing or singing. One of my sons, at age 2, would tell me 'don’t look at me' in an attempt to do something he wasn’t supposed to, and to avoid the feeling of embarrassment."

Dr. Tovah Klein is the director of the Barnard College Center for Toddler Development, and the author of How Toddlers Thrive. She says toddlers can also feel embarrassed by too much attention and focus being on them. (Hard to believe, I know. Especially considering my own son used to literally grab my face every four seconds to get me to look at what he was doing.) But Klein says when they have not asked for it or don't want attention, they can find it mortifying.

"Singing 'happy birthday' to a two or three year-old can cause them to bury their head into a parent's shoulder or start to cry," Klein says. "Another example is a toddler may say something that is heard as cute and funny by adults, so the adults laugh. The toddler can become embarrassed without any understanding as to why the attention is on them or why others are laughing."

And just like adults, toddlers cringe when their big plans don't pan out. "They could be building a block tower and it falls down, when their idea was to build it tall. This lack of ability to build the tower can cause embarrassment, even if no one ridiculed them for it. It is the embarrassment of not being able to do something they desire to do," says Klein. (I feel ya, toddlers.)

As for how to handle when your toddler is having a bout of embarrassment? Klein and Bryson both agree that it's actually important to note it. While it might feel like the right thing is to spare your little one's feelings, and just stare off into the distance and whistle like you totally didn't notice that their magna tile chair was a massive failure of architectural integrity, really, the right thing is to point out the emotion the child is feeling. "Label it and provide comfort to them," Klein says. "You really wanted to get on that climber and instead you slipped down. That embarrassed you. Sometimes things don't work out as planned. It's ok, and if you want to try again later you can.' Provide comfort to help them move on, and for most children, don't overly dwell on it. You can let them know that everyone gets embarrassed at times. Similarly, parents can model. If you accidentally knock over a glass of milk, rather than feeling badly about it, grab a sponge, clean it up and let you child know that spills happen sometimes, no big deal."

Wise words, indeed. We all blunder sometimes, both old and young. I must remember this the next time I accidentally try to pay for a latte using a tampon I just pulled from my coat pocket. It happens. No big deal...

Dr. Tovah Klein, director of the Barnard College Center for Toddler Development, and the author of How Toddlers Thrive

Dr. Tina Bryson, psychotherapist and the founder of The Center for Connection and Play Strong Institute

More Like This
Covid Vaccine “Deserts” For Kids Under 5 Make It Almost Impossible For Parents To Find Shots
Tips to Beat Jet Lag, For You & Your Kids
Julia Fox’s Apartment Tour Is Peak Mom Realness
What To Do If Your Toddler Keeps Taking Off Their Diaper At Night
What Parents Are Talking About — Delivered Straight To Your Inbox