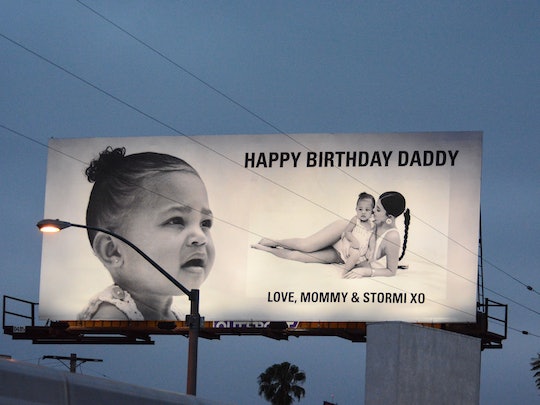 Wait, Does Kylie Jenner Seriously Want Another Baby Now? Sure Sounds Like It

Kylie Jenner clearly loves being a mom. You would know this if you followed her on social media and since every person on the planet follows her I guess you already know this. Her little girl Stormi Webster has become one of the most instantly recognizable babies in the universe and she certainly seems like a happy little girl. But it's not just motherhood that has Jenner feeling great these days; it's family life in general: Her life with Stormi and Stormi's dad, rapper Travis Scott. In fact, one of her recent Instagram posts has fans wondering if Kylie Jenner wants another baby, perhaps because she just went ahead and said she wants another baby so... it's not a massive mystery here, guys.

Travis Scott recently celebrated his birthday and we know this because the Lip Kit mogul made such an enormous deal out of his birthday every girlfriend everywhere softly groaned in unison. First she posted a full billboard message in West Hollywood, as per Harper's Bazaar, complete with an adorable picture of Stormi as well as the words "Happy Birthday Daddy, Love Stormi and Mommy xo." And now? Now she shared a super intimate look into their life together and her dreams for their future on Instagram.

Jenner shared a series of photos of the couple together with their little girl (and is it just me or does it look as though Scott might be proposing in the above photo?) along with the message:

watching you evolve into the partner, friend, son, and father you are today has been so fulfilling ♥️ my real life bestie & hubby all wrapped into one. i love you and I’m so so proud of you. happy happy birthday 🎉🎁 let’s f**k around and have another baby. 🤪

So yeah... she essentially just said she wants another baby. And Travis' reply didn't tell us anything other than the fact that the couple are apparently quite happy with each other these days. He replied on Kylie's Instagram:

Will all of this raging 4ever actually result in a little brother or sister for Stormi?

This isn't the first time Kylie has put it out there that she's ready for another baby.

In February Kylie shared a picture of herself hugging Scott after he performed at the Super Bowl halftime show with Maroon 5. She captioned that photo, "Baby number 2?"

Considering the Illuminati-level secrecy surrounding her first pregnancy with Stormi, when she only acknowledged she was pregnant after giving birth with a YouTube mini-documentary called "To Our Daughter," all of this heavy hinting is a bit of a departure for the youngest KarJenner daughter.

This could mean one of two things, in my opinion. Either Kylie Jenner is trolling all of us and trying to trick us into thinking she'll have another baby, or she is just really wanting to get pregnant again and having trouble thinking of much else.

I'm really hoping it's option two or else I'm going to feel a bit of a fool.