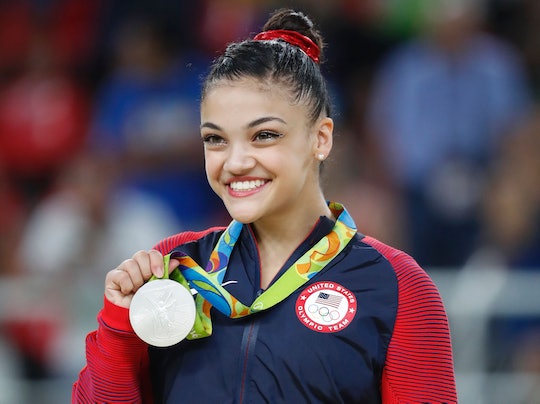 Does Laurie Hernandez Have Dance Experience? She'll Need It For 'Dancing With The Stars'

When it was announced that Laurie Hernandez, of the U.S. Olympic gymnastic team, nicknamed the Final Five, would be appearing in the upcoming season of Dancing With the Stars, it made me so happy. Mostly because who isn't ready for more of Hernandez, who became an instant favorite when she helped her team bring home so much gold? But does Laurie Hernandez have dance experience? It's not a requirement for contestants of Dancing With the Stars and it's become something of a tradition to watch the transformation of cringe-worthy bad celebrities gradually gain their footing as dancers, but as a gymnast, you have to assume that Hernandez has at least some experience with dancing.

As it turns out, tumbling, back-flipping and doing insane gymnastic stunts isn't the only thing Hernandez is good at. Even though she lost interest in official dance lessons as a kid and opted out to pursue gymnastics (big surprise), she apparently has the moves to allow her and dance partner Valentin Chmerkovskiy to go far in the competition. As Hernandez told Good Morning America, "They call me Baby Shakira." And while Shakira hasn't busted out those expert hip-shaking moves in a while, that's kind of an amazing comparison.

According to Hernandez, "My earliest memory was watching gymnastics on live TV, and wanting to do what the 'big girls' did. I started a gymnastics class at five years old, but it became serious at seven." This was after delving into dance lessons for a little while, but apparently giving up the lessons as a little kid did nothing to deter her from cultivating her moves enough to be super confident about her place on Dancing With the Stars this season.

At 16, Hernandez was the youngest gymnast to go to Rio and won first place in the Women's Team All Around competition at the 2016 Summer Olympics, taking home gold for that and silver for the balance beam. And now, she'll be dancing on national TV, further showcasing her athleticism but in a different way, though one that also has her at the mercy of judges, however less pressure might be on her this time around.

Most recently, Hernandez and three other members of the Final Five were able to present Beyoncé with the MTV VMA for Best Female Video and it was clear that, although she's already reached such great heights at such a young age, she can still be humble when it comes to bigger things. Like, you know, Queen Bey.