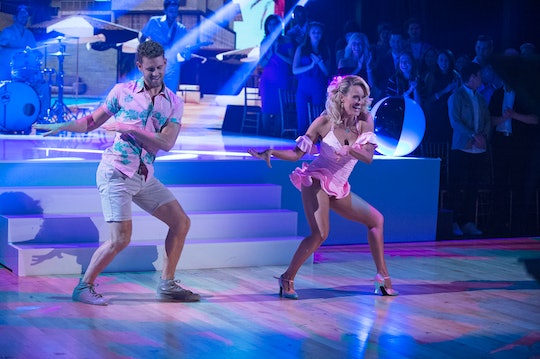 But aside from some laid back dancing that has to have happened somewhere along the way during his time in Bachelor Nation, Viall doesn’t have professional experience prior to this dance competition. Though you wouldn’t know it as you watch him dedicate himself to each routine every week. In fact, before he began looking for love on reality TV, Viall was a software salesman from Wisconsin. But these days he’s living in Los Angeles and pursuing modeling.

Maybe he’s used to being in front of the camera, but as far as professional dancing goes, Viall is nowhere near as experienced as some of his competitors this season. He might have been a track star in high school, but just being athletic isn’t exactly the same thing as coming into DWTS already knowing how to dance. Luckily, he was paired with pro Peta Murgatroyd, who’s been able to help him along the way and bring out a playful side that not many fans have been able to see until now.

In the most recent rehearsal package that was shown for Week 6, Viall chastised himself while learning the newest dance routine and his very real insecurities regarding the show came out. "Honestly at this point, I’m trying to survive," he said before calling himself a "reality TV reject." But the former Bachelor star has been nothing if not dedicated this season. During his and Murgatroyd’s performance to "Fun Fun Fun" by the Beach Boys, he seemed confident and definitely brought out the fun in the song, but it wasn’t enough to wow the judges this time.

Guest judge Nick Carter told him that he needs to work on his moves while Len Goodman said that the routine was lacking "polish and finesse." Even if you didn't love Viall as the Bachelor, you had to feel a little bad for the guy. Each week, he seems to be working hard at learning and executing Murgatroyd’s choreography. During Disney Week, the duo actually scored a 34/40, their highest yet, and Julianne Hough told Nick, "Each week you are getting better and better."

But when it comes to any formal dance training, Nick is one of the few contestants this season who hasn’t had any. So when you put it into perspective that way, he really is doing an impressive job.