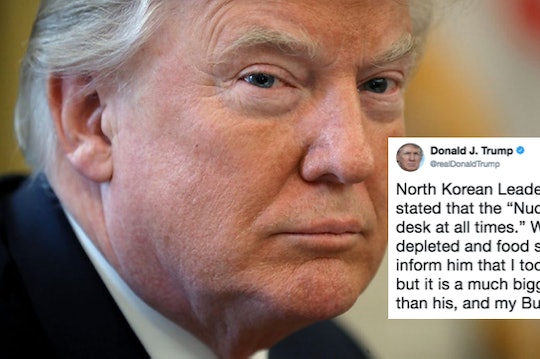 Does President Trump Actually Have A "Nuclear Button" On His Desk?

On Tuesday night, President Donald Trump taunted North Korea's dictator Kim Jong Un on Twitter about having a "bigger nuclear button" and being ready to use it. The fact that Trump is insisting on treating nuclear war like a celebrity feud is terrifying, but you might feel better when you remember that Trump doesn't really have a "nuclear button" that he can just press under his desk. Though I totally got that he was going for that Dr. Evil vibe in order to have North Korea's Dear Leader shaking in his boots. But it's seriously unfunny.

Let's back up a minute in case you missed this on Twitter or are (intelligently, I might add) just ignoring the president's petulance this early into 2018. North Korea has been bragging about their nuclear power for years, and for some reason, Trump has decided that taunting them about it — instead of working towards actual diplomacy with the help of allies, such as South Korea or China — is the best course of action.

Kim Jong Un has happily been playing along, even as Trump calls him names like "Rocket Man." On Tuesday night, Trump tweeted:

North Korean Leader Kim Jong Un just stated that the ‘Nuclear Button is on his desk at all times. Will someone from his depleted and food starved regime please inform him that I too have a Nuclear Button, but it is a much bigger & more powerful one than his, and my Button works!

Let's just put aside the fact that his toxic masculinity (since when do we need to compare the size of anyone's "button" in politics?) might actually trigger a show of power from North Korea, and get into whether or not Trump has access to a big "nuclear button" or not.

The whole process for launching a nuclear strike is thankfully really complex and, obviously, secret. If it weren't, someone could theoretically go all Designated Survivor and somehow thwart the process if it came to that. There is, however, a nuclear "football" that gets passed around a rotating group of military officials and has "communication tools and a book prepared with war plans," according to ABC News.

If Trump wanted to launch a nuclear strike, according to ABC News, he would have to give officials at the Pentagon a code that's unique to him and carried on a "biscuit" that the president has at all times. He would give the command to the Pentagon and they would carry it out.

The Washington Post reported that this is technically a good thing, since it deters other countries from starting something with the United States. If they know that the president doesn't have to go through any slow moving bureaucracy or vote to fly a drone or launch a nuclear missile, they might be less likely to move first.

However, some representatives in the House aren't super thrilled about that these days, given that Trump is dictating foreign policy via tweet and are nervous that Kim Jong Un will interpret the taunts, and regular, ongoing military exercises as a sign of war, according to NBC News. The White House said in a press briefing on Wednesday that Americans should be worried about Kim Jong Un's mental state, and not Trump's, according to Politico.

San Francisco Rep. Eric Swalwell tweeted, "If you love our country, help me put this lunacy in check. Tell @realDonaldTrump this is not normal behavior. Any @HouseGOP members want to make sure Congress has some say before he pushes that button?"

In November, Massachussetts Rep. Ed Markey introduced legislation that would give Congress some say about what the president does with the nuclear "biscuit, according to The Atlantic:

So, you can sleep a little bit better knowing that Trump doesn't have an actual button under his desk to launch a missile straight to North Korea. And he does have to go through at least some military professionals, and maybe one day even Congress, before he can blast the world to smithereens.

That's something Americans should be proud of. It's what sets us apart from dictators like Kim Jong Un. Now if only someone could tell the president that.