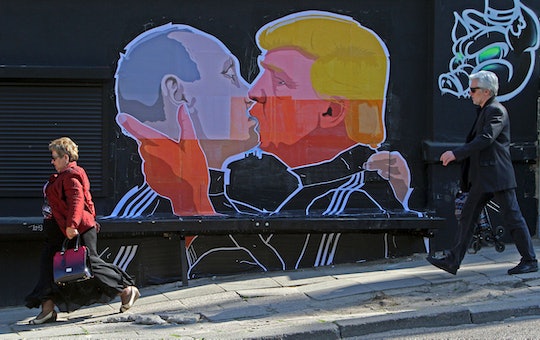 The Russian government has not denied culpability for an email leak over the weekend that ultimately forced the chairwoman of the Democratic National Committee to resign. That tacit reaction inspires the question of whether or not Vladimir Putin wants Donald Trump elected, because the as of yet unidentified leakers may have been looking to aid the Republican presidential nominee in his quest for the Oval Office. Trump is reportedly an enthusiastic Putin fan with proposed foreign policy objectives that would elevate the Kremlin's power on the world stage, so it makes sense that he'd support the candidate's unlikely political ascension.

More Like This
The Bates Family Keeps On Growing: Get To Know All 19 Kids Here
Bindi Irwin Has Been Sharing The Cutest Photos Of Her Daughter
Everything You Need To Know About Prince Harry & Oprah Winfrey’s Series
Lisa Kudrow’s Son Used To Say "Mommy!" When He Saw Jennifer Aniston On TV

On Wednesday, DNC chair Debbie Wasserman Schultz announced that she'd resign after the leaked emails, which were distributed by WikiLeaks, revealed that DNC officials allegedly heavily favored its new nominee, Hillary Clinton, over her onetime opponent, Vermont Sen. Bernie Sanders, throughout the primaries. Although Trump's rise to the status of Republican presidential nominee has undoubtedly caused some major fractures within the party, the embarrassing revelation exposed fissures among Democrats as well.

The move worked to sow discord just ahead of the Democratic National Convention in Philadelphia this week... just as a prominent foreign entity with a vested interested in a Trump presidency would want. And an investigation by a security firm the DNC hired when it first suspected its servers had been infiltrated pointed to Russia as the culprit.

And it makes objective sense that the Russian government would want Trump as Commander-in-Chief of the United States. In a recent interview with The New York Times, Trump said that, as president, he would not automatically defend NATO countries that hadn't met their "obligation to make payments." And because the whole point of the North Atlantic Treaty Organization is to ensure that all members defend one another no matter what, according to Vox, Trump would essentially destroy the agreement by not honoring it. This would make it much easier for Putin expand into eastern European countries like Estonia and revive its "Soviet-era influence over its region — to a degree previously thought impossible," as Zach Beauchamp writes.

Putin is an astute and strategic political leader whose objectives are oftentimes diametrically opposed to those of the United States. American politicians almost unanimously view Russia as an adversary, but that hasn't stopped Trump from repeatedly praising him and even musing about whether the two will become best friends.

"I will tell you that, in terms of leadership, he's getting an 'A' and our president is not doing so well," Trump said in a September interview, according to Vox.

In the aftermath of the email scandal, Trump has even encouraged Russia to commit further cyber crimes on the United States. "Russia, if you’re listening, I hope you’re able to find the 30,000 emails that are missing," he said this week, according to The New York Times, referring to emails Clinton allegedly deleted from the private server she used as Secretary of State. "I think you will probably be rewarded mightily by our press."

Putin has so far remained mum about both this flattery and call-to-action, in addition to whether or not he is indeed behind the DNC leak. Trump, though, has made it more than clear that he'd love to be in cahoots with a man most American politicians distrust on nearly molecular level. Now that espionage has (potentially) entered the picture, it's hard to imagine how election season 2016 could get any weirder. Somehow, I think it will.